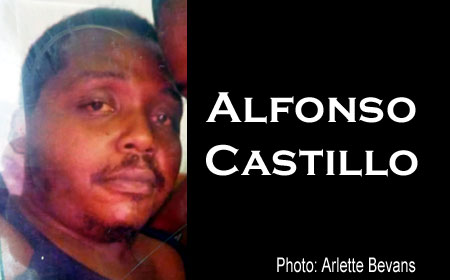 BELIZE CITY, Thurs. July 28, 2016–Alfonso Castillo, 30, a resident of Victoria Street who was scheduled to be released from the Karl Heusner Memorial Hospital, after recovering from being stabbed, died at about 7:00 this morning.

On Thursday, Castillo became involved in an altercation with his lifelong friend, Raheem Marsden, who allegedly stabbed him.

Castillo’s grieving family told us this afternoon that Alfonso, also known as” Fonso,” was scheduled to be taken home today to continue his recovery. His grieving aunt told us that he walked alone into the bathroom, from his bed in the ward, but a man who saw him go in noticed that he did not come out.

He immediately alerted a nurse, who went into the bathroom to see what was happening, and discovered Fonso slumped over on the toilet seat. Immediate attempts were made to resuscitate him, but he was unresponsive.

The doctor who examined him declared that he had died, and his body was taken to the morgue for the mandatory autopsy to certify the cause of his death.

Fonso’s aunt, Arlette Bevans, reported that he was coming along fine, and they were hopeful that he would be home with them after doctors said that he was going to be released from the hospital. They are all devastated.

Bevans said that they will always remember him as a peaceful and loving person.

This afternoon when Amandala went to the residence, family members were all gathered there, and there was much sadness and mourning.

Four days after the stabbing incident, CIB police levied charges in court of attempted murder, dangerous harm and use of deadly means of harm upon Raheem Marsden, 24, a laborer of Rhaburn’s Alley.

The police allegations are that the two men got in an argument and according to Castillo, Marsden pulled out a knife and stabbed him twice, once in the abdomen and once in the shoulder.

The prosecutor had objected to bail, saying that while the attempted murder was not with a firearm, the criminal history of the accused, Marsden, shows a pattern of violence. He said that Marsden was before the court on June 28, 2016, when he pleaded guilty to wounding another person.

He submitted that if Marsden was granted bail, he may commit another offense due to his violent history and/or tendency to be violent. He was then remanded to the Belize Central Prison until October 18, the date set for the prosecution to disclose its evidence.

Since Castillo has died, however, Marsden is expected to be returned to the Belize City Magistrate’s Court to be charged for murder.

Funeral arrangements have not yet been made.