BELIZE CITY, Thurs. July 28, 2016–American national Bradley Paumen and his co-accused, his mechanic Lizburn Anderson, Belmopan businessman Jahan Abadi and Korean-American Hyang Choing Park, all appeared before Chief Magistrate Ann Marie Smith in her Belize City courtroom on Tuesday afternoon, along with their attorney Herbert Panton for a preliminary inquiry into charges of attempting to pervert the course of justice and conspiracy to pervert justice.

After reviewing the paper evidence and statements police had gathered, the Chief Magistrate concluded that there is enough evidence for a prima facie case against the accused persons, so she committed them to stand trial in the October session of the Supreme Court. 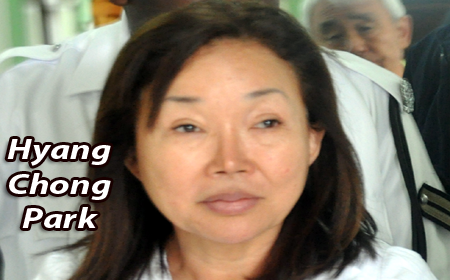 The two charges stem from an incident in April 2015 when they attempted to plant a .22 rifle and 150 .22 rounds in Michael Modiri’s vehicle.

Modiri, an Iranian businessman, owns lands that are beside Paumen’s Dark Knight Cave Tubing business, located in Franks Eddy, in the Cayo District.

The two men have had a contentious relationship over the land because Paumen has to access his business through Modiri’s property. A Supreme Court Justice recently ordered Paumen to pay Modiri $300,000 as damages and punitive damages for trespassing on his property.

Hyang Choing Park is the former common-law wife of Modiri, who police believe was involved in the plot against Modiri.

In April, another preliminary inquiry was held in the Belmopan Magistrate’s Court before Chief Magistrate Smith, who committed Paumen and his co-defendants to stand trial at the Supreme Court on four counts of abetment to commit murder.

Paumen is accused of plotting to kill Michael Modiri, his attorney and two of his employees.

They had been committed to stand trial in the June session of the Supreme Court.