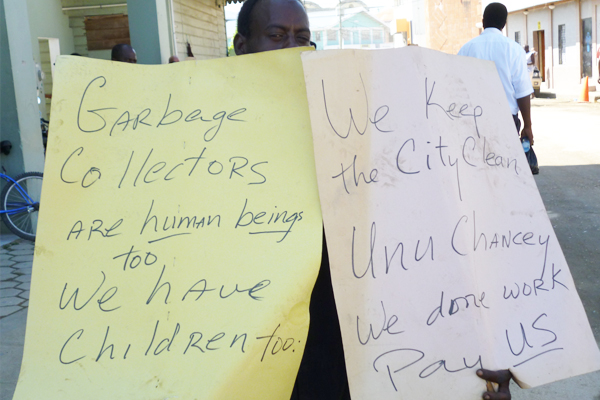 Belize Waste Control manager says the company hasn’t been paid for almost 3 months, and is owed about $600,000

Around 40 sanitation workers, who have been released from their jobs by Belize Waste Control limited because of lack of funds, picketed the Belize City Council at about midday today. The picketing was conducted on North Front Street in front of the Council, and the workers said that they will continue their protest until the Council pays the company, so they can be paid and are able to resume work.

Elliston Lamb, the manager of the Belize Waste Control Ltd., told Amandala that the company had exhausted their resources and could no longer keep on the workers. He said that the company is owed around $600,000, and had not received payment going for about three months, from September.

Lamb said he had been trying to meet with Belize City Mayor Darrell Bradley to get the money that was due them, but to no avail. He said that to date, the mayor has not seen him.

A skeleton crew is kept to do basic garbage collection, he said, but the majority of the workforce has been released.

He challenged the Mayor to show the books publicly, because they are public records, he said.

A laborer told Amandala that they were called in this morning on their arrival at work, and told that they were being released because the company, not having been paid by the Council since September, could not afford to pay them any more.

He said that they quickly organized themselves and went to picket the Mayor’s office in the hope that the payment would be made quickly so that they could resume work. He said that they would demonstrate every day until the company is paid.

During the protest march, a BWC sanitation truck was blaring its horn, and traffic was disrupted in front of the City Hall on North Front Street.