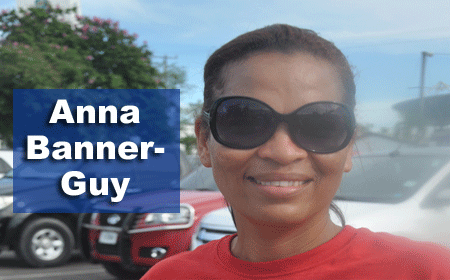 It wasn’t smooth sailing for the UDP to fill the six slots for their city council candidates. Infighting in the ruling party had led to one incumbent councilor, who has served two terms, to be left off the party’s main slate.

And this councilor had decided not to go away quietly.

So, notwithstanding the fact that the party had chosen a slate for Belmopan, the rejected two-term councilor, Anna Banner-Guy, put her name on the ballot for today’s voting, which took place at the Belmopan Civic Center from 9:00 a.m. to 5:00 p.m.

About one hour before the voting came to an end, Amandala caught up with Banner-Guy who, along with the three-term former Belmopan mayor, Simeon Lopez, was working hard to attract last-minute voters.

We asked Lopez, who was decked out in a t-shirt boldly emblazoned with Banner-Guy’s picture, why Banner-Guy was not with the UDP slate, and why she had to mount her own campaign to get on the party’s ticket.
Lopez explained that the Belmopan UDP had chosen their 6 candidates in the hopes of not having a convention.

“I am a person who stands for fair play,” he said. “Anna was unceremoniously pushed off the slate, and she’s a sitting councilor. A group of us encouraged Ann to still apply before the closing date and get into this.

The power-that-be does not want her, even though she’s a UDP. So we are going to see if we can get her into that six.”

Amandala asked Lopez what he thought of Banner-Guy’s chances of winning. He said he thought it was over 90 percent that she would win.

We asked Banner-Guy why she was excluded from the UDP’s ticket.

“It is unfortunate that I am, because I had applied to become a candidate for the returning slate,” Banner-Guy said. “The mayor and the rank and file of the UDP knew that I had interest in returning as a candidate for the third time. I believe there was a deliberate attempt to try to get me off the slate. I think that happened through the powers-that-be, as it relates to the area representative (Hon. John Saldivar).”

Banner-Guy went on to explain that she did not support the Belmopan leader, Hon. John Saldivar, at the UDP leadership convention held last year.

“It is unfortunate that he took it to this level,” Banner-Guy said. “At the end of the day, I am looking for a victory. We will continue to work well as a city council.”

We asked Banner-Guy what she thought of her chances of making it on the UDP ticket.

“I don’t know who won’t make it,” she said. “But I know I will make it. I have been working in my community for many years and I believe the people of Belmopan have come out…I feel confident…I see a lot of my supporters out here.”

After Banner-Guy left us to go with a young woman who was waiting for her to take her to vote in the Civic Center, Amandala spoke to the incumbent mayor, Khalid Belisle.

When we asked him about the Banner-Guy situation, the Mayor said that he tried not to take a side in the issue.

It is rare indeed, when a candidate who fails to get her party’s endorsement, overcomes in the end. Banner-Guy’s spirited challenge came up short. When the final tally of votes came in, it showed that she had garnered 512 votes, 200 less than Paul Chun, who finished in sixth place with a total of 702 votes.

Angel Pastrana topped the polls with 786 votes. The other councilor candidates elected for the UDP are Jacklyn Burns, 769 votes; Jem Pascascio, a newcomer to politics, 754 votes; Louise Willis, 747 votes; and Isidoro Galvez, 734 votes.

A total of 1,067 registered voters cast ballots in the city councilor convention. Nineteen votes were spoiled.

In a text message on Friday, Belmopan area representative Hon. John Saldivar told 7News that he was not behind what has turned out to be the political demise of councilor Banner-Guy.

Saldivar’s text explained, “As the deadline for submission of applications approached, the Executive only had confirmation from four current Councilors that they would seek re-election. Mrs. Guy made no effort to contact the Executive and confirm her interest in running. To the contrary, the talk around was that she would not be seeking reelection. The Executive had no choice but to seek out other candidates …In fact, Mrs. Guy submitted her application fifteen minutes before the deadline, by which time the Executive by necessity had already contacted three other candidates.”