Home Headline Anyone can apply for another’s birth certificate!
Headline

Anyone can apply for another’s birth certificate! 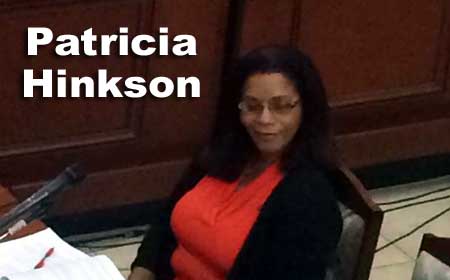 BELMOPAN, Cayo District, Wed. Oct. 18, 2017–Alleged murderer, kidnapper and extortionist, William “Donny” Mason, as well as international fugitive Nanes Schnitzer and others documented in the special audit of the Immigration Department, have been able to obtain Belizean birth certificates at will.

This is because the Vital Statistics Unit appears to be overly lax and has no real measures in place to regulate the issuing of these documents. Apparently, anyone can use another person’s birth certificate to illegally get documents they should not have.

In her appearance before the Senate Select Committee today, Assistant Registrar at the Vital Statistics Unit, Patricia Hinkson, confirmed the worst.

Here is an excerpt from an exchange between Hinkson and the senators who sit on the Senate Select Committee:

Senator Aldo Salazar: “Some years ago, there was a person who was caught with a birth certificate. Now, he wasn’t born in Belize, wasn’t Belizean, but he was found using the birth certificate of somebody who was born, I believe, in Shipyard, and pretending that he was that person born in Shipyard.

Hinkson: “But anybody can apply for a birth certificate.”

Senator Salazar: “Right, so that is really what I think my colleague is trying to get at: what measures are there which would assist something like that not occurring? Or is it something that we can’t prevent, because anybody can apply for a birth certificate and pretend to be somebody [else]?”

Hinkson: “No, no. Once that person has his or her Social Security or passport, they can apply for any document in that unit.”

Senator Smith: “If I apply for you, I have to have only an ID for myself?”

Hinkson: “So they can scan that ID.”

Senator Smith: “To show who applied for it, so in the end if it turns out that that is not a proper paper, then you would be able to find…”
Hinkson: “If the document is used by someone else, then you can tell exactly whose ID was scanned, and who signed, because they also have to sign a signature pad.”

Senator Carla Barnettt: “Is the Vital Statistics office in any way responsible for determination of identity? So that when somebody comes for a birth paper or apply for a birth paper, do you get in the business of determining identity at all?”

Senator Barnett: “Therefore, when somebody wants to use that birth paper to get a passport, to get Social Security, to get whatever, then the responsibility is on those agencies to go through their due diligence?”

Hinkson: “I would assume the person has to produce an ID.”

Senator Salazar: “But what I want to know, and this is following up from my colleague which I believe is what the concern is, what exists right now that would prevent, let’s say, I come from wherever, I come from Vietnam and I bring a considerable amount of money, and I try to speak to somebody inside your office, and I want them to produce a birth certificate for me, as if I was born in Belize. What is in place that would prevent me from being able to do that? I am not casting aspersions on anybody; I’m just speaking generally; if I come, what would prevent me from being able to get one person to produce a document which I am not entitled to?”

Hinkson: “It all depends on the integrity of the fixer and the verifier.”

Hinkson: “Or in the case of you going to the registration clerk at the hospital; it depends on her because she registers and she inputs also.”

Senator Salazar: “But I’m an adult already; I’m already an adult. That is pertinent for children – if you have a child who was born in Guatemala and comes. If we have people who are data entry who don’t have integrity in that regard, then you would be able to…”

Hinkson: “The system tells you exactly who did what, and on what day that action was done.”

Hinkson’s appearance before the Senate Select Committee lasted less than half hour before she was dismissed.