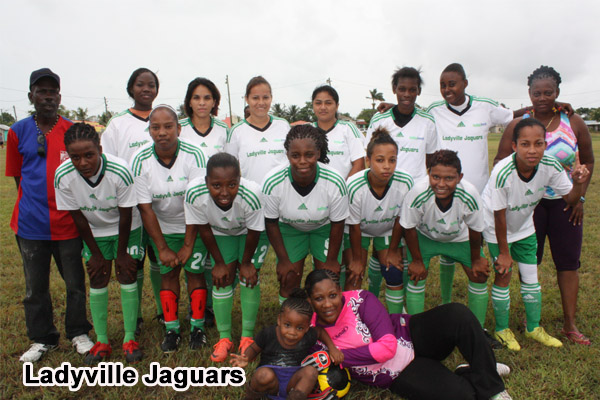 The first leg of the home-and-away semifinals in the Atlantic Bank Female Football Tournament took place on Sunday, August 4, in Belmopan and in Ladyville, and the critical second leg will be played this weekend in Dangriga and San Ignacio, to determine which two teams will go on to the championship round.

At the Ladyville football field on Sunday, visiting Dangiga Pumas came from behind twice to pull out a 2-2 draw against home standing Ladyville Jaguars. In first half, Sara Arzu (20’) gave Ladyville the 1-0 lead, but Jacklaine Arzu (26’) equalized for Griga. And in second half, Claudia Martinez (58’) put Ladyville in front again, 2-1; but once more Griga got the equalizer, this time from Shamaya Quniah Caliz (89’), for the 2-2 final score.

In the other semifinal out west at the Belmopan Stadium, home-standing Triple B got some early help from visiting Gentle Touch, whose 2nd minute auto goal set the stage for an eventual 3-1 victory for Triple B. Triple B goals were by Kiana Martinez (22’) and Kaya Cattouse (31’), along with the auto goal by Gentle Touch’s Elthene Gentle (2’). The only goal for Gentle Touch came from Cynthia Salazar (44’).

In the upcoming Game 2 of the semifinals, if there is an aggregate tie at the end of regulation, then overtime will be necessary. Going into Saturday’s showdown, Triple B will have a comfortable 2-goal cushion over Gentle Touch; but come Sunday, the Pumas and the Jaguars will be “even Steven” to start their decisive Game 2.