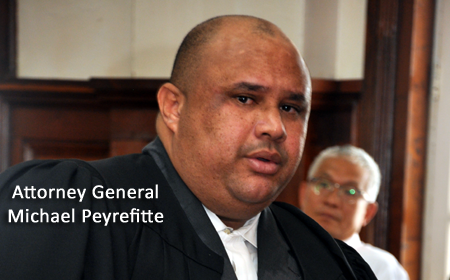 BELIZE CITY, Thurs. Jan. 19, 2017–The newly-appointed Attorney General, Hon. Michael Peyrefitte, in his address to the Bench and Bar at Monday’s opening of the legal year, indicated that he would want to tackle the regime of mandatory sentences.

That Supreme Court decision established an important principle and now persons convicted of firearms offences no longer have to languish in prison for 5 years.

Sylvestre explained to a reporter yesterday that under the law as it is presently constituted, there are mandatory minimum sentences which are passed upon individuals and in many instances, the sentences are disproportionate.

Sylvestre, whose practice is at the criminal bar, used as an example a case of carnal knowledge that he is presently appealing at the Court of Appeal and which involved two high-school students. The male in the case was 15 years old at the time he was convicted of carnal knowledge of a female who was 13 years old. His conviction got him sentenced to 12 years in prison.
“Here it was that you had two high-schoolers; he was in third form, she was in first form. And this individual was convicted and was sentenced to 12 years; he’s been in prison serving a 12-year sentence since 2011. And so that instance, those of us who practice at the criminal bar realize that these mandatory minimum sentences, they do create disproportionate and cruel sentences in certain instances, and there needs to be a complete revision of the laws that determine the appropriateness of it,” Sylvestre explained.

Sylvestre added, “These are all things that those of us who practice at the criminal bar believe should be looked at, so it is something which certainly, we welcome, and I’m sure there are many other attorneys would put their input, because this is something that will be of great benefit to the country and to persons who are affected by the criminal justice system.”

One reporter asked Sylvestre, “However, is anybody taking into account the victims? Yes, you defense attorneys, fueled by international human rights agencies, have taken on the cause of the convicted. However, there are so many victims of crime who feel that the persons who cause them trauma or their family so much grief are not properly penalized, or most times, are not even convicted. Where are their rights?”

“Well, no, we are not advocating for the legislature for laws to be passed to go easy on them. What we are saying is that mandatory minimum sentences, at times, it ties the hand of a court. I gave the instance of the young man who was 15-years old; you know he was convicted of carnal knowledge of a 13-year-old. The man got 12 years. I mean, that is a grossly disproportional sentence that is something that in any standard, is considered cruel and inhumane. But there may be other instances where maybe a 50-year-old who is charged with raping a 13-year-old, who should not only get 12 years, but perhaps maybe get 60 years or so. What is being suggested is that you give and allow the court to look at the facts and to determine the appropriate sentence,” Sylvestre replied.

“By altering the minimum sentence laws, judges would have more freedom in handing down judgments based on the particular circumstances of a case, rather than being forced to give someone a possibly disproportional punishment,” he further explained.

Sylvestre also cited the drug trafficking law where the mandatory minimum fine is $10,000 and three years in prison.