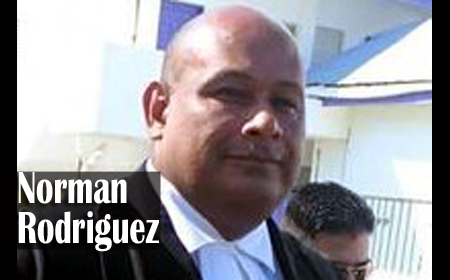 BELIZE CITY, Thurs. May 16, 2019– Former Magistrate Norman Rodriguez, who was arraigned on a charge of rape in early May 2017, has not had his day in court since a preliminary inquiry committed him to a trial in the Southern Session of the Supreme Court.

Today, the Office of the Director of Public Prosecutions confirmed that Rodriguez’s case will come up for mention on June 6 when the Southern Session of the court convenes. At that time, a date will be set for the court to proceed with the trial, Amandala was told.

Rodriguez is accused of the rape of his former common-law wife. The incident allegedly occurred in April 2017, at Rodriguez’s house when he was stationed in Dangriga Town as a magistrate. Since then, Rodriguez’s contract with the Government of Belize has expired and has not been renewed.

Rodriguez is a trained attorney and will soon get a chance to practice his craft in the Belmopan Supreme Court when he will represent one of the accused murderers in the sensational beheading murder case involving Danny Mason.

Facebook
Twitter
Pinterest
WhatsApp
Print
Previous articleBelize, this is not the time to lie down and play dead while we await the verdict of the ICJ
Next articleCabinet approves Maritime Areas Act amendment and appoints Assad Shoman to be Belize’s ICJ agent