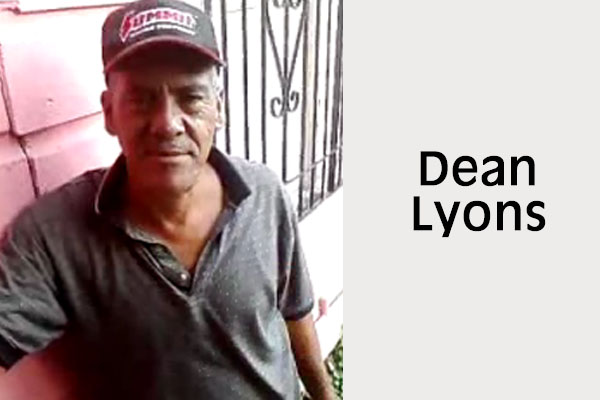 One day before his 57th birthday, and a little over 9 hours after winning a “substantial sum” of money through his selection of the single number 75 in the Sunday lottery, Dean Lyons, 56, was shot to death yesterday evening while sitting on the steps of a house on West Canal, a short distance from Mike’s Club.

His family is devastated over his sudden death.

According to a police report, police visited West Canal between Water Lane and Orange Street, where they saw the body of Hector Dean Lyons, a self-employed man of Cemetery Road, Belize City, on the steps in a sitting position, with his head hanging down, with a gunshot wound in the left side of the head and an exit wound in the right side of the head.

Police said that their initial investigation reveals that at about 7:25 last night, Lyons, a taxi driver with other sources of income, was sitting on the steps of a house next to the sidewalk on West Canal when a dark-complexioned man wearing a black shirt rode up to him and asked for some money.

When Lyons, also known as “Bad Card” because of his love for gambling, took out his wallet, the man callously shot him in the head, took his wallet and rode away on a bicycle.

Lyons was taken to the Karl Heusner Memorial Hospital, where he was pronounced dead on arrival by Dr. K. Rivera at 8:50 last night.

His daughter, Francine, told Amandala that she was at her home on Rasta Street when she got a phone call informing her that her father had been shot. She rushed to the area where the shooting occurred, and on her arrival, saw her father being loaded in the pan of a police mobile unit. She was allowed to see her father, before he was taken to the morgue.

Francine said that she is devastated, because this was unexpected. Her father, she said, was not a person to cause trouble or conflict, but was friendly, and always ready to give advice. He had encouraged her to stay in school to get an education, she said.

A cousin of Lyons, who didn’t want her name revealed, said that she returned from the USA on Saturday, and Lyons had gone to visit her yesterday, Sunday. They talked for a while, and he seemed relaxed, the cousin recalled. Before he left her house, he told her that he would return today, Monday, to see her, she said.

Monday was also the day on which Lyons would have been paid his lottery winnings (he had derived the winning number, 75, by reversing the numbers in his upcoming age, 57), and it is possible that the murderer believed that he had already collected his money that Sunday. Our reports are that Lyons tried to collect the money yesterday, Sunday, but the Chinese grocer told him to wait until today. The family believes that inside his stolen wallet was the winning lottery ticket.

Lyons’ cousin said that yesterday evening, Sunday, she was at home when she got a call that he had been shot. She immediately went to the area of the shooting and saw that he was already dead.

Police have since launched an investigation and are looking for the shooter.

Dean Lyons is survived by his mother, 94, who lives in the USA, and a brother and two sisters. He was the father of three children, including Francine, and is also survived by his common-law wife, Lola Flowers.