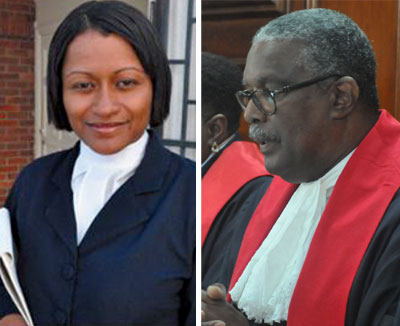 BELIZE CITY, Thurs. Nov. 21, 2019– The Bar Association of Belize has filed a fixed date claim at the Supreme Court naming Chief Justice Kenneth Benjamin, in his capacity as the Chairman of the Judicial and Legal Services Commission (JLSC), as the first defendant.

Under the Constitution of Belize, the President of the Bar Association is a member of the JLSC.

For two consecutive terms since 2018, the Bar Association of Belize has elected Cheryl-Lynn Vidal as its president. Vidal, however, is also the Director of Public Prosecutions.

After she was elected president of the Bar Association of Belize, and had provided proof of her election in March, Vidal was invited to attend a scheduled meeting of the JLSC.

Vidal, however, was asked to withdraw from the meeting by the Chairman of the JLSC. This was done in the presence of other members of the JLSC, the court papers said.

Since then, Vidal has never been invited to, or informed about, subsequent JLSC meetings. “The president of the Bar has therefore been refused the right to attend and participate in meetings and decisions of the Commission for more than a year,” the court papers said.

The claimant is therefore seeking relief from the court for Vidal to be appointed to the JLSC in her capacity as president of the Bar Association of Belize. The Bar is also asking for a declaration that as long as Vidal remains president of the Bar, that she is allowed to attend meetings and participate in the decisions of the JLSC.

The Bar is also asking for a declaration that the Chairman of the JLSC requiring the withdrawal of Vidal from the duly convened meetings of the JLSC on March 23, 2018, and thereafter treating Vidal as being disqualified from being a member of the JLSC and participating in its decisions because she holds the public office of Director of Public Prosecutions, was unlawful and a breach of sections 110E (2) and (3) of the Belize Constitution.

Another declaration that the Bar is seeking is a declaration that all decisions of the JLSC, purportedly made during the period of Vidal’s absence, were unlawfully made and are unconstitutional and without effect, having been made by an unlawfully constituted JLSC in breach of section 110 E of the Belize Constitution.

In addition, the Bar is also asking the court for an order that the Fifth Defendant complete and forward to the first defendant, and to the JLSC, any required evidence of the appointment of Vidal as a member of the JLSC effective from the date of her first election and appointment as president of the Bar.

The Bar is also seeking an injunction restraining the defendants from any acts of interference to prevent Vidal from participating in meetings of the JLSC, as long as she is president of the Bar.

Vidal was appointed Director of Public Prosecutions on June 4, 2010.