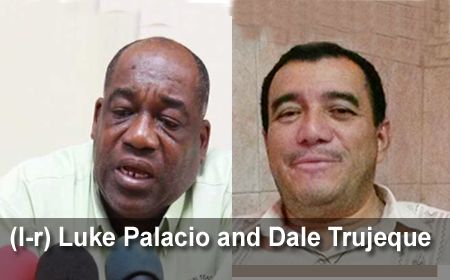 BELIZE CITY, Wed. Apr. 5, 2017–Amidst a recession, the Cabinet of Prime Minister Dean Barrow will spend one million dollars of taxpayers’ monies to reward teachers who did not participate in strike action against the Government of Belize (GoB) last October.

These teachers who did not participate in the eleven-day strike showed up for classes as per normal, but they were unable to complete any lesson plans because their students were also absent.

Deputy Prime Minister and Minister of Education, Hon. Patrick Faber, earlier this week told the media that this million-dollar “gift” would be divided among those teachers before the Easter break.

He said, “We thought that it would be important to give some kind of honorarium to those teachers, and so in consultation with the Prime Minister [Dean Barrow], we have agreed to set aside one million dollars that will be divided among those teachers as a small honorarium.”

In a statement released this week, the BNTU has claimed that this is another attempt by the government at union busting.

Readers will recall that at the end of 2016, the government was furious in its attempt to dock the salaries of teachers who had been part of the protest, so much so that only a court order could have stopped the docking.

Readers will also recall that last year GoB had passed a statutory instrument, which it used to threaten teachers on strike that they would be replaced by teachers who were less-qualified.

The statement released by the BNTU this week also claimed that GoB was hell-bent on punishing the teachers who, “stood up against the glaring acts of corrupt practices that were being meted out on the Belizean people.”

According to the BNTU, “in these difficult economic times, GoB continues to squander public funds in an effort to buy public support and to keep our people subservient, afraid, intimidated, powerless and poor.”

As a result, the BNTU is appealing to school managers to reject what it considers government’s attempt at union busting.

The BNTU advises that the $1 million could be used to improve the physical conditions of dilapidated school buildings and to buy critical equipment.

“We call on our BNTU members who did not go on strike, but went to school for whatever reason/s, to reject the offer of money because when this same Minister of Education and his operatives decide to ‘deal with you,’ it is to the BNTU that you will turn and WE WILL BE THERE FOR YOU,” the statement ended.

In a statement released today, Wednesday, the Christian Workers Union (CWU), led by president Dale Trujeque, has echoed the sentiments of the BNTU.

“Like BNTU, we view the Government’s decision to distribute $1,000,000 among those teachers who chose not to participate in last October’s strike action as very poorly disguised union-busting.”

“CWU sees no justification for this reckless action, especially given the challenging economic times we are now experiencing and which will look likely to get worse. How does this move helps Belize?” the statement asks.

According to president Trujeque, ‘This million-dollar give-away shows what poor losers Minister [Patrick] Faber and his Government are and serves as a powerful warning to all how far they are prepared to go to have their own way.”

On Saturday the BNTU will be meeting to discuss further steps to stop Faber’s apparent union-busting attempt.