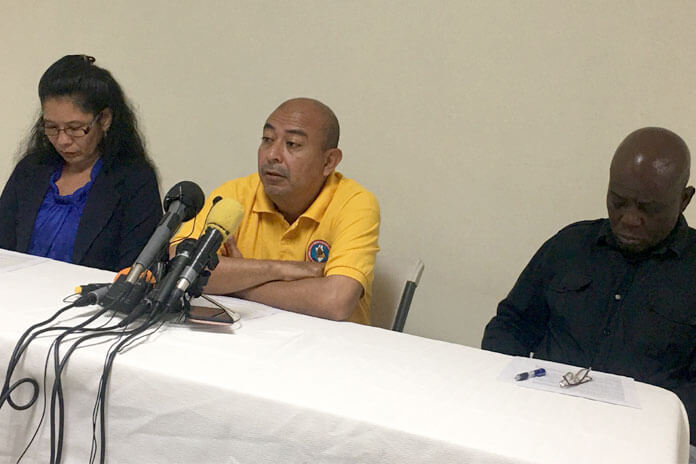 Unions will demonstrate against corruption Thursday

The umbrella group of 10 trade unions released a 6-point anti-corruption/good governance agenda, but did not specify a timeline for what course of action it will take if its demands are not met; only saying that this is just the beginning.

BELIZE CITY, Mon. Feb. 17, 2020– General elections are scheduled for later this year, and the National Trade Union Congress of Belize (NTUCB) is now embarking on a pre-election agenda aimed at tackling corruption in order to ensure more transparency in governance.

Apart from the trade union leaders at the head table, all members of the NTUCB were present for today’s launch.

The NTUCB has taken the position that there should be no elections until:

1) The implementation of campaign financing laws that (a) mandate existing and aspiring politicians to disclose the source of their financing campaign financing exceeding $1,000 BZE). (b) establish limits on campaign contributions from individual donors and organizations (one-time deposits as well as annual cumulative contributions e.g.$4,000 BZE) and c) require politicians and political parties to disclose an official donors list during campaign periods.

2) The re-convening of meetings for the UNCAC Steering Committee, the adoption of recommendations from the executive summary and the start of procedures for the second phase of UNCAC.

3) The tabling of the Senate Report on the Immigration Department and the carrying out of police investigations and convictions where illegal actions are reported.

4) The restructuring of the Integrity Commission and the Public Accounts Committee for reduced government influence in roles and responsibilities due to political appointees and for more efficient oversight on government spending.

5) The implementation of sanctions or penalties for individuals found liable and/or who contravened, violated, or did not comply with the provisions of the Finance and Audit (Reform) Act (No. 12 of 2005)

6) The start of an independent investigation into alleged wrongdoing by former Minister of National Security, Hon. John Saldivar, and all other named public officials, public servants and individuals.

In the question-and-answer period which followed the NTUCB presentation, Mora was asked if the six-point agenda is going to be negotiated while the demonstration goes on.

“We would have to have some discussions with the administration,” Mora replied, “The issues raised here are issues of governance. Our issues are not against any political party. None of the political parties would condone openly any act of corruption.”

Mora was asked the NTUCB’s position on the $1.5 billion that the government (PM Barrow) spent unconstitutionally.

Mora said that the issue of the $1.5 billion was discussed at their meeting, but there is an array of opinions on that very legal issue.

“From the onset, looking at the decision of the court, it is clear that something is not right. We would have to go back to the discussion and look at it again and iron out a position on it. These other issues are very short term, but we will have to go back and address that issue,” he said.

Senator Smith stressed that this is not a fight against a political party. “This is about our country and good governance. So, we are having all our unions join together,” she said.
Senator Smith stressed that this campaign, which the NTUCB dubbed, “Only the people can save the people,” was organized so that there could be “a joining of forces” that would include “the NGO community, the business community, parents, students, anybody who has a concern for our country”.

The question was asked if the ten unions can mobilize in such a very short time.

“The initial feedback that we are getting is that all unions are more than ready to send as many members as they can. If it is that our demands are going to meet resistance, then our strategic plans will have to kick in,” Mora said.

“How far are you prepared to go to get these demands satisfied?” the NTUCB was asked.

Mora explained, “they, the government, have more than enough time to sit down and dialogue with us. But we also have our members; the people that you see here at the head table speak for and behalf of the people who make the decisions.”

Enriquez said, “There are those people who are clamoring for elections now, and so what we are saying is that unless these points are met, we don’t want to hear about elections now.”

Mora explained that the UNCAC is a very long process and these demands they have outlined are just the beginning. “Whether it is this administration or the next administration, we will continue to push forward,” he said.

Senator Smith said that any party who is unwilling to make these changes will show that they don’t have the country and the people at heart.

Mora said that the list of demands is “do-able”. “All of our members understand the dire importance of addressing these demands. The NTUCB has no intention of going on its own with these issues, so we are calling on every single individual and organizations to join us so that we can make the necessary changes,” he said.