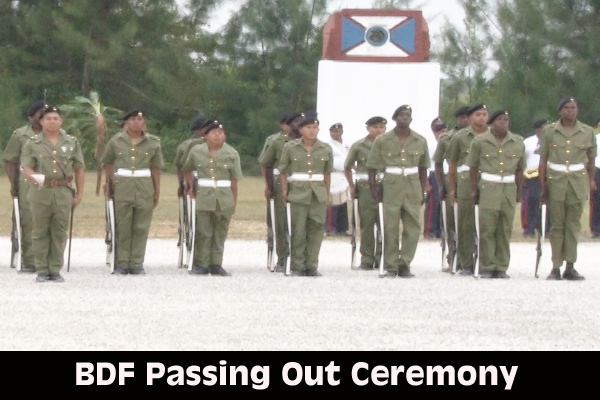 Today, the Belize Defence Force (BDF) had passing out ceremonies for its newest set of enlistments – known as Recruit Intake #57 – which coincided with the celebration of the BDF’s 36th anniversary.

The ceremonies were held on the Parade Square at Price Barracks in Ladyville this afternoon for the 81 new BDF soldiers, which notably constitute the largest regiment of recruits to join the force in the history of Belize’s military.

According to the Commandant of the Belize Defence Force, Brigadier General David Jones, a little over fifty percent of the recruits persevered after 4 months of intensive training. He said, “We started out with about 150 recruits, and we ended up with only about 81 who were able to go through the intense training and stresses of becoming a soldier in the Belize Defence Force. The training included field craft, which means that they need to be very good in the jungle or any conventional terrain. It also includes marksmanship, where the soldiers are able to learn everything about the weapon, [including] how to strip it, how to assemble and how to fire it accurately in order to defeat their enemy. They also learned medical [skills] and so they are able to do first aid not only here on the base, but also on operations in the jungle. If someone gets hurt, they are able to render first aid to their comrades.”

Jones mentioned that there are intentions to further increase the ranks of the BDF in order to both keep the peace in Belize City, as well as to thwart the unwarranted incursions which are rampant along the periphery of Belize’s border. Jones said, “With the task that the BDF has right now, we assist the police on the streets of Belize City, but due to the activities that are happening along the border – which is our main focus – we believe we need more soldiers. We have expressed this to our Minister, and they have answered our call and said yes, we will get our increase. We normally have only about 40 that pass out in training, and today we have doubled that.”

He also spoke about the perks of being a soldier. “The good thing about joining the BDF is that you get fed three meals per day, [therefore] your salary is for yourself or your family. There are many [other] benefits of being here; you get to travel abroad, you get to meet different people from all over the world and the most important thing about being a soldier is serving your country. We [do] go through very difficult times in trying to serve our country [though], especially with the challenges that we face along the border, and apart from those stresses, the additional stress of having to assist the police in other operations in Belize City,” he said.

The Minister of National Security, Hon. John Saldivar, welcomed the 81 new soldiers to the force. In his keynote address, he commented on the evolution of the BDF since its inception in 1978. He stated, “This is an occasion of saying congratulations to the BDF on their 36th anniversary. It is also the first anniversary of the assumption of command of the BDF of Brigadier General, David Jones. Thirty six years ago, a nation in the making sent out a call for able-bodied men and women to undergo intense military training with a view to form a credible defense force that would be able to stand guard on our borders and safeguard it. It was those brave and courageous men along with other like-minded persons not here today who, without hesitation, answered that call. As I understand it, many people predicted that the young Belize Defence Force would not stand the test of time and/or the challenges — particularly so, once the British Forces departed our shores. Fortunately, these people were proven wrong, for not only did the force survive, but it has grown and continues to grow in strength and capabilities year after year.”

According to Saldivar, there are intentions to increase the size of the BDF by over 500 soldiers by the year 2016.