BDF soldiers to be withdrawn from City streets 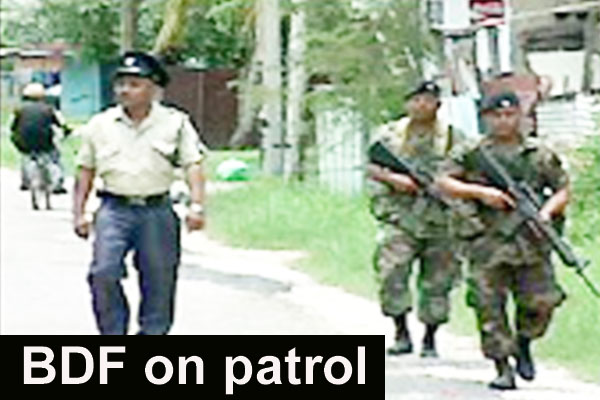 Their boots have been stomping the Belize City streets for over the past two decades in an effort to curb the raging urban warfare which had been taking a toll, especially in the crime-ridden and gang-affiliated neighborhoods of the “Old Capital;” but now, the Belize Defence Force (BDF) plans to gradually reduce the number of soldiers who are presently deployed in the environs of the city.

The soldiers – who have been working in tandem with the Belize Police Department – are scheduled to be taken “off the beat” at the end of this month, which would be two weeks away.

As we understand it, the move has been partially prompted by the recent increase in the ranks of the Police Department, who added 120 new officers to their regiment just two weeks ago, which brought the tally of police officers in the country to somewhere around 1,500.

Secondly, the reduction in the incidences of violent crime over the past year – in which there was a record decrease in the murder rate – as opposed to the previous year which saw the highest records of murders and violent crimes in Belize’s history, is believed to have contributed significantly to the withdrawal of the soldiers.

Also, the military’s top brass is concentrating on putting the soldiers back in the jungles of Belize so they can carry out their main mission, which is to protect and secure the country’s borders.

Although the decision has already been made, we understand that it will be flexible, depending on the fluctuating nature of crime in Belize City.

Today, Amandala spoke to the CEO in the Ministry of National Security, Col. (Ret’d) George Lovell, who confirmed what he said was a “gradual scale-down” in the deployment of the soldiers, but added that it doesn’t mean that there won’t still be soldiers patrolling the streets as is needed.

Lovell told us, “It’s gradual, simply because we are trying to get the police to replace the BDF officers who are on the street working along with them, so there will be a gradual reduction in the number of BDF personnel from the street; however, this does not mean that there will be no more BDF officers out there.”

He then explained that the presence of the BDF will be stepped up whenever there are large gatherings and major public events, such as the September Celebrations and the Christmas holidays.

CEO Lovell said that the reduction has started already, citing that “if there’s a need for us to boost the numbers of soldiers in the street, then we will do so, but the intent is for the BDF to be able to move from the streets and focus more on those border areas.”

The BDF soldiers who patrol the streets from time to time reportedly make up approximately 25% of the army’s squadron.

According to CEO Lovell, the BDF was first deployed to the Belize City streets in the late 90’s when murders and gang activity first spiked, and they have been regularly patrolling the thoroughfares ever since.