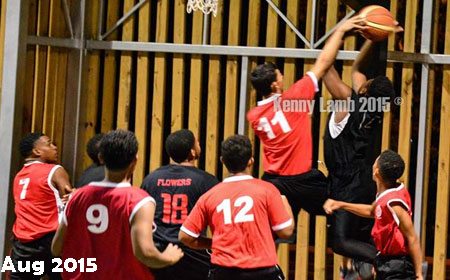 SAN IGNACIO TOWN, Sun. Dec. 6, 2015–The BECOL basketball tournament came to a close this past weekend, as 4 other teams joined Western Queens as 2015 BECOL champions. On Friday night, game 1 of the Under 19 division finals tipped off, as Christian Ambassadors (#1) narrowly edged SHC (#2), 45-44. Shaquille Crawford was the leading scorer for Christian Ambassadors with 14 points, while Antuane McFadzen sank 13 pts. SHC was led by Jovanne Zetina, who had the game high with 19 pts, while Orel Neal finished with 12 pts, and Raheem Crawford chipped in 10 pts. With the win, Christian Ambassadors took a 1-0 lead in the Under 19 finals series. In game 2, Light and Peace (#1) swept the two-game series, 52-42, in the Under 23 category, defeating Spartans (#2). Light and Peace top scorer was Ian Augustine, Jr. with the game-high 21 pts, while Luis Barcelona tallied 13 pts. Spartans were led by Khalil Banner and Kevin Brown with 13 each. With the win, Light and Peace are the 2015 BECOL U23 champions. In the nightcap, the number 1 seed in the Senior division, Panthers, fell to Benque Power (#3), 58-51. Brandon Flowers was the top scorer for Benque Power with 18 pts, while Roberto “Mosho” Castellanos and Ivan Flowers netted 11 pts apiece. In a losing effort, Panthers were led by Garrett Bermudez with 12 pts, Johann “Cutto” Bermudez with 9 pts, and Zamir Usher and Daniel Nolberto with 8 pts each. With the win, Benque Power was able to extend the series to a third and deciding game 3.

On Saturday night, Sacred Heart College (#2) boys lost another nail-biter in overtime, 56-49, crowning the #1 seed, Christian Ambassadors as U19 BECOL champions. Christian Ambassadors were led by Shaquille Crawford, who had the game high 24 pts, while Clency Lopez sank 19 pts. SHC’s top scorers were Afrie Black with 18 pts, and Raheem Crawford with 8 pts. In game 2, Yabra (#2) was the only undefeated team in this year’s BECOL tournament, sweeping the finals in the Over 35 division, 2-0, as they defeated Roaring Creek Special Effects (#1), 47-32. Cassian “Russian” Flowers was the top scorer for Yabra with 14 pts, while Charlie “Dunk” Armstrong chipped in 11 pts, and Kevin Domingo scored 9 pts. Roaring Creek was led by Karon “Civic” Neal and Kevin Cruz with 8 pts apiece, while Eddy Rowland netted 7 pts. In the nightcap, Panthers (#1) was able to win the deciding game 3 in the Senior division, defeating Benque Power (#3), 59-38, to become this year’s BECOL Senior champs. Panthers were lead by Daniel “Buddy” Nolberto, who scored the game high with 15 pts, while Johan “Cutto” Bermudez sank 9 pts. In a losing effort, Brandon Flowers was the top scorer for Benque Power with 11 pts, while Roberto “Mosho” Castellanos and Ivan Flowers finished the game with 9 pts each.

The San Ignacio and Santa Elena Basketball Association (SSBA) would like to extend its gratitude to BECOL for sponsoring this year’s tournament, while remaining committed in the development of basketball in the San Ignacio area for the past ten years. Thanks to all the players, coaches and fans that came out to support the growth of basketball in our community. Lastly, special mention to all the referees, table officials and SSBA executive committee for the countless hours you invested at Falcon Field. Congratulations to all the winning teams and MVPs, as we look forward to next year’s season. Special mention to all the media houses that continue to partner with us in the promotion of sports in our country.