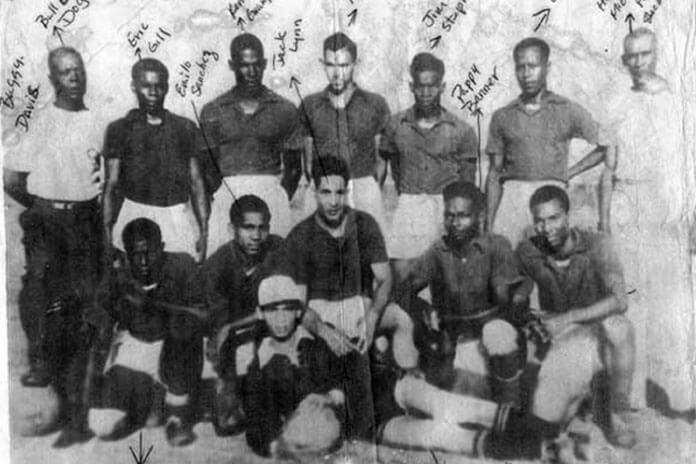 BELIZE CITY, Thurs. July 30, 2020– Last week Thursday, his grandnephew, Jason Guild, informed our sports desk of the passing in Chicago on June 15 of Belize City football star of the 1940s-50s era, Eric Gill, who had migrated to the USA in 1954. Younger generations of Belizeans will have no knowledge of Eric Gill, but a sizeable community of Belizeans in the Chicago area were apparently touched by his personality. Our sincere condolences to his family.

Below we re-print a portion of a June 28, 2017, From The Publisher column that makes reference to Eric Gill as part of an All Belize team. Eric may have been a teenager in the 1940 picture shown, because a subsequent picture sent by Jason Guild shows a veteran Eric Gill along with the legendary “Pine” Hernandez on a Belize team in Chicago; and Pine migrated to Chicago in the early or mid-1960s.

From the Publisher
Wednesday, June 28th, 2017
About three weeks ago, Maurice Jones brought the 77-year-old photograph to me which is reproduced on this page. He said that one Nick Sanchez had given it to him. I didn’t get a chance to find out any details about Nick Sanchez, because I was so busy trying to identify the legendary football players/athletes in the photo.

The writing on the photo says it is from 1940, but there is some confusion as to how many of the players are from the famous Crimson football team, because this is also supposed to be an All Belize selection. It is distinctly pointed out that Louis Guild, who is second from right in the back row, is actually from the Police team. But there is no other such distinction made. (When I discussed this with my dad, he was positive(?) Louis Guild never played for the Police, and he mentioned that Jim Stephen was MYA.)

In the row of five players who are kneeling, second from left is Emilio Sanchez, who later became Jamaica’s national boxing coach for many years.

In the center of that kneeling row is Jack Lind, who was as formidable in cricket as he was in football, while on the far left of that kneeling row there is a suggestion that this may be George “Rough Tough” Young. If so, Young must have been very young in 1940, because I believe I saw him play for Landivar in the middle 1950s at Edwards Park (now Rogers Stadium). On Jack Lind’s immediate left is a man we know as Parpy Banner, but on Parpy Banner’s left we don’t have identification on that individual.

In the back row, we begin on the left with the iconic Bulldog Davis, who appears to be a coach. I only saw Mr. Davis in his senior years, and he was still possessed of an incredible physique, while his eyes were extraordinarily light in color.

On Mr. Davis’ left is Eric Gill, and the only Eric Gill I know was called “Wappa,” and, to the best of my knowledge, he is still alive in Chicago. Wappa was also a famous track star in British Honduras.

Left of Wappa is Kenneth Ewing, and I believe he may have been a track sprinter, while I am positive the man next to Ewing, on his left, was indeed a great track sprinter – Roy Canton. Roy Canton was also a great basketball player, and was very good in tennis.

Next to Roy Canton on his left is a man I have heard my dad speak of many times with great respect – Jim Stephen, and left of Mr. Stephen is the aforementioned Louis Guild, who fathered the late Berger 404 superstriker, Gene Guild, as well as Emerson and Steve.

At the extreme right on the back row is Mr. Horace Michael, who would have been one of the coaching elders. He was known as a man of respect. He is referred to as a shoemaker in the photo caption.

It is not possible to identify the goalkeeper, who is wearing a cap and lying in front of the kneeling row of players.

There is important history represented by the photograph, but there are very few still around to hold discussions about that history, and amongst those in Belizean power and authority, both in the sports bureaucracies and in the political directorates, there is a strange and total lack of interest in such matters…

(Amandala Sports Ed. Note: You can check the Amandala archives online for the complete From The Publisher above. Of interest also to current readers, Emilio Sanchez, in the above picture, is the father of legendary 1970s-80s super-striker Maurice Jones.)