The City of Kaohsiung, Taiwan donated 15 laptops, valued at BZD $20,000, to assist students who need such devices for virtual learning 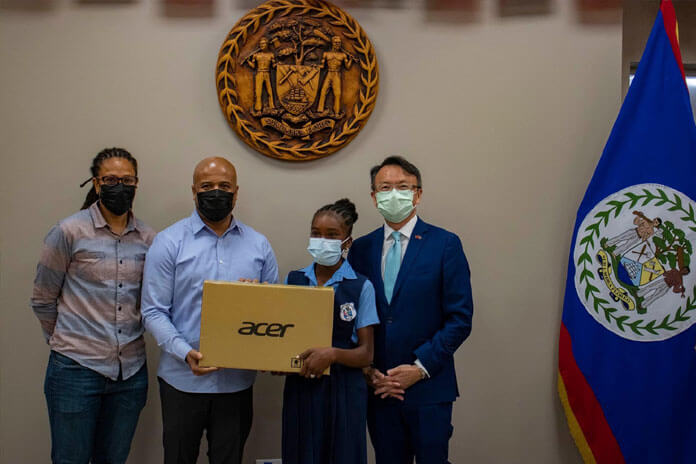 BELIZE CITY, Wed. Jan. 12, 2022– In a handing-over ceremony that took place this Wednesday, the Belize City Council received a donation of 15 laptops from its sister city of Kaohsiung, Taiwan. The donation, which was facilitated by the Embassy of China (Taiwan) here in Belize, was made after the Government of Kaohsiung reached out to the council asking how it could assist the city’s schoolchildren. Those laptops have been gifted at a key juncture, when many schools are beginning to reopen, with plans to implement a hybrid in-class and virtual learning model.

Twelve deserving students from across various levels of learning and three institutions were given the laptop packages, which contain an Acer laptop, its accessories, and a carrying case.

“Today, playtime is different, research is different, final exams, shopping, traveling…So much is different today,” said Mayor Bernard Wagner in his opening address at the ceremony. “But in spite of the very many things that have changed, our adaptive, talented young minds still have their eyes on their prize!” he said.

One of the many things that have changed, stated the Mayor, is the fact that now, technology is often a necessity rather than just a privilege. As a result, a digital divide has been created—one where many are not fortunate enough to have access to the devices needed for learning and communication. Kaohsiung City’s timely donation will help the council in further chipping away at that digital divide.

Mayor Wagner expressed his gratitude to Taiwanese Ambassador David Kuan-Chou Chien, Kaohsiung Mayor Chen Chi-Mai, and the Embassy of the Republic of China (Taiwan) in Belize.

In addition to Mayor Wagner, both Mayor Chen (via virtual message) and the Taiwanese Ambassador spoke at the ceremony. 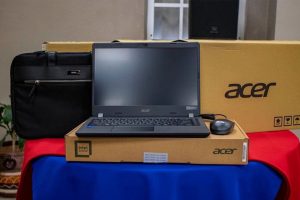 young generation,” stated the Taiwanese Ambassador. “The access to digital appliance is pivotal when physical classes have transformed into online learning.”

The three educational institutions that received a laptop were James Garbutt Primary School, Anglican Cathedral College, and Lloyd Coffin Preschool. Of the twelve students to receive a laptop, the youngest was an 8-year-old student from Saint Martin de Porres School.

Belize City and Kaohsiung established a sister city relationship in 2005 and have continued to maintain a strong and cordial relationship since then, especially in recent years.