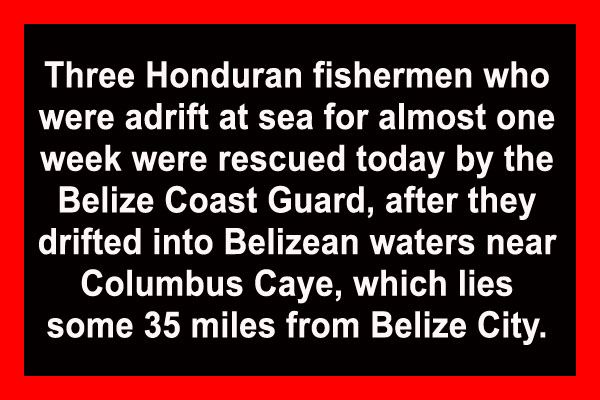 Three Honduran fishermen who were adrift at sea for almost one week were rescued today by the Belize Coast Guard, after they drifted into Belizean waters near Columbus Caye, which lies some 35 miles from Belize City.

The Coast Guard made the announcement about the rescue this afternoon, when Lieutenant Gregory Soberanis, the Coast Guard’s Operations Officer, briefed reporters at their headquarters.

Soberanis said that last Thursday, the Belize Coast Guard received a call that there were three Honduran nationals who were reported missing at sea.

“The families of the men believed at the time that they had drifted into Belizean waters,” Soberanis disclosed. “As a result the Coast Guard patrol station at Hunting Caye was put on alert to be on the lookout for these three Honduran nationals, as they operate in that sector,” he said.

Soberanis recounted, “This morning after 7:00 a.m., we received a call from a local fisherman on Columbus Caye that a 30-foot vessel had drifted into his vessel that was anchored at the time.”

The fisherman told the Coast Guard that there were three men onboard the vessel and that they had identified themselves as Honduran nationals.

Soberanis said that the men fit the description of the three men who were reported missing from Honduras.

“The quick reaction team that is stationed here at Coast Guard headquarters was deployed to the location to recover the three Honduran nationals, for them to be given medical attention, because they were dehydrated, hungry and fatigued,” Soberanis explained.

The three rescued men were brought back to Coast Guard headquarters and are recovering at this time, said Soberanis.

He added that they have maintained communications with the Embassy of Honduras and have also been in contact with family members. One of the individuals who were recovered has family members here in Belize, Soberanis said.

The men told the Coast Guard that they are from Guanaha, Honduras, and that they were fishing in that area when their boat developed engine troubles and they began to drift last week Tuesday.

“They were very happy to have been found early this morning and brought here to the Coast Guard, where further assistance was given to them”, Soberanis said.

“They had gone out fishing for the day and were about eight miles from their home, but they drifted approximately one hundred miles. They did not have any food and were very hungry when we found them”, said Soberanis.

The Honduran Embassy will validate that indeed they are Hondurans and then they will be processed by the Belize Immigration Department so that they can be transported back home.

Danly Kelly, 26, one of the rescued men, said their battery died and their boat began to drift.

“We only had one gallon of water and that lasted us until last night,” Kelly, who is fluent in English, explained.

When asked what was going through his mind while the boat was adrift, Kelly said he was thinking about his family, because they had an idea more or less where the drifting boat was taking them.

He said he was able to communicate with his family last night, when the local fisherman picked them up.

The other two men who were rescued are Brian Donald Puerto Herrera, 17, and Darrel Dilbert, 18.

Kelly said that he has been fishing with his father from a very young age.