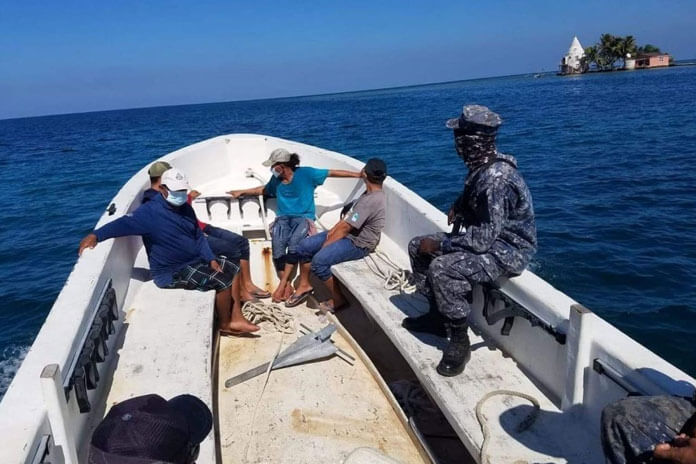 Hunting Caye, Southern Belize, Fri. Oct. 1, 2021– On Tuesday, September 28, the Belize Coast Guard successfully conducted a search and rescue operation near Tom Owens, an area in the vicinity of Hunting Caye, that led to the rescue of four Honduran fishers who had been stranded at sea for over three days.

Reports indicate that the Honduran vessel, Fatima 20, began experiencing mechanical issues near Amoa, a Honduran area of the Caribbean Sea. The Fatima 20 later drifted from this location into Belizean waters near Tom Owens. The Coast Guard subsequently acted on reports from locals who noted a vessel drifting approximately five miles north of the Hunting Caye area. The Belize Coast Guard quickly deployed a unit from Hunting Caye, which came upon the drifting boat.

Upon finding the vessel, the Coast Guard sailors went on board and thoroughly assessed the situation. The fishermen told them that they were unable to propel their vessel forward and had been drifting at sea for over three days.

They said that they had intended to embark on a fishing expedition when they set sail in Honduras, prior to the search and rescue operation in Belize. The men apparently were weak and dehydrated, and so the Belize Coast Guard provided them with some basic necessities and allowed them to remain on the operating base for the night until they were taken back to Punta Gorda to commence their journey back to Honduras.

The Fatima 20’s engine was beyond repair. As a result, the men journeyed back to Honduras by land. The Coast Guard will make arrangements with the Honduran Navy so that the vessel can be retrieved and taken back to Honduras.