Belize may look at commercial use of Fish Aggregating Device (FAD) 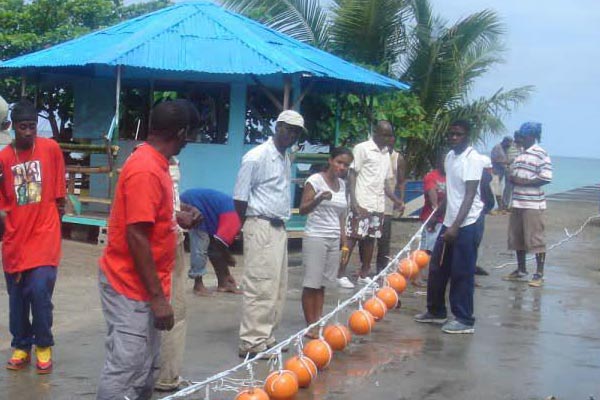 “FADs are man-made drifting or anchored buoys or rafts that attract and aggregate fish and other marine organisms:” FAO

Fisherfolk in the Caribbean continue to be concerned about the high cost of fuel and the financial hardship it has imposed on their operations, but the use of an emergent technology known as Fish Aggregating Devices (FADs) is gaining momentum as a means by which the fishing community can venture off into deeper waters to harvest pelagic species such as tunas in a more cost-effective way.

Belize Fisheries Administrator Beverly Wade told Amandala that whereas tour guide personnel in San Pedro have also tested the device for sports fishing, Belize has not yet ventured into the use of FAD for commercial fishing.

However, Wade said: “We have not ruled out FADs in Belize.”

She added that FADs may have the potential to contribute to the expansion and development of fisheries in the country.

Belize’s fisheries department will be among the national fisheries authorities represented at an upcoming workshop to look at FAD fishery management in the region. The event will be held from Monday, December 9 to Wednesday, December 11, 2013, at the Methodist Church Hall, in Kingstown, St. Vincent and the Grenadines.

“The CRFM-JICA CARIFICO / WECAFC-IFREMER MAGDELESA Workshop on FAD Fishery Management will provide a forum for participating countries and agencies to review and share research results and best practices in the construction, use and management of FADs as tools for sustainable development, management and conservation of large pelagic resources in the Caribbean,” said a statement from the Caribbean Regional Fisheries Mechanism (CRFM).

“In order for the Caribbean to derive tangible benefits from the use of FAD, the devices must be properly managed and regulated. The harm that can be done by the unplanned use of the device, and by poor management and regulation, could result in major losses of not just fishery investments—but also of the fishery resources upon which the region depends for employment, food security and nutrition,” the CRFM said.

Wade told Amandala that the use of FADs has been piloted in some Eastern Caribbean countries, particularly in Dominica.

She said that Belize had previously experimented with some to see if it could develop a pelagic fishery. A report by the CRFM highlighted the use of FAD in several Caribbean jurisdictions, including Antigua and Barbuda, Grenada, St. Kitts and Nevis, St. Lucia, and St. Vincent and the Grenadines.

The CRFM notes that in the case of St. Kitts and Nevis “…over the past 5 years the concept of FADs was resuscitated through a series of workshops that were held island wide. 18 privately owned FADs were constructed and deployed in the waters of the Federation. FADs were seen as measures to reduce fishing pressure on reef fishery, lure new entrants to the sector, and enhance food security and sports fishing.”

Next week’s meeting is a follow-up to a joint CRFM and JICA session held in March 2013, when best practices in the construction, use and management of FADs were discussed.

Out of the CRFM-JICA alliance has come a new regional project – the Caribbean Fisheries Co-management Project (CARIFICO). The project was launched on May 1, 2013 and it is due to run until 2018.

“Future work plans and action plans for the countries directly involved in the implementation of field activities under the CARIFICO project will be discussed at the upcoming meeting,” the CRFM said.