Home Features Belize: A destiny to be questioned
Features

Belize: A destiny to be questioned 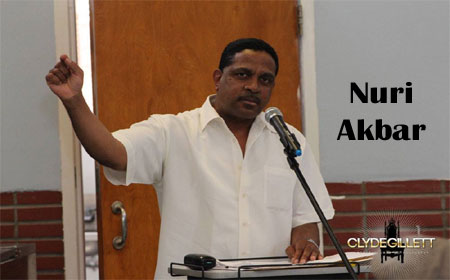 First they came for the Socialists, and I did not speak out—

Because I was not a Socialist.

Then they came for the Trade Unionists, and I did not speak out—

Because I was not a Trade Unionist.

Then they came for the Jews, and I did not speak out—

Because I was not a Jew.

Then they came for me—and there was no one left to speak for me.

In January of 2013 in the wee hours of the night four Black Belizean young men’s throats were meticulously and professionally slashed inside their homes. Almost four years later this horrific massacre has remained intentionally unresolved. There is a variety of speculation as to who gave the orders; however, there is no doubt that this clandestine single operation was carried out by trained professional’s killers. What is not clear is whether they were foreign or domestic.

On June 20, 2016 in the wee hours of the night another clandestine operation occurred in Belize. This time it was the homes of a well-known Muslim family, the Ahmads (Bulwer). According to the Amandala, 19 members of the entire family including women and children were rounded up like cattle by local police and held for hours in custody without access to any legal representation or counsel. Eventually after this traumatic experience the family was released without any charge being filed.

According to the Amandala, various high-ranking officials within the Police Department, including the Commissioner himself, claim they did not authorize such an operation? It must be made explicitly clear that this tactic by senior officers and government officials is reflective of their training/indoctrination of what is called “plausible deniability”. Plausible deniability, according to the US Legal dictionary, refers to circumstances where a denial of responsibility or knowledge of wrongdoing can not be proved as true or untrue due to a lack of evidence proving the allegation. This term is often used in reference to situations where high ranking officials deny responsibility for or knowledge of wrongdoing by lower ranking officials. In those situations officials can “plausibly deny” an allegation even though it may be true.

At the time of writing this article, the victims of this despicable act are scheduled to hold a press conference and tell their side of the story.

While Belize has its growing share of home-grown degenerates and scumbags in both high and low places, the country has become a refuge Mecca for all kind of foreign rejects. These range from right wing evangelicals, various religious denominations, white supremacist/KKK, ex-military and black water contractors, pedophiles, scam artists in the offshore financial sector, land speculators posing as investors, various non-profit agencies, etc. According to ex-CIA agent John Stockwell in his book “In Search Of The Enemies,” these are only a small fraction of some of the various avenues sometimes use as front/cover for CIA operatives, spying and other subversive activities in the developing world. After the end of the so-called Cold War thousands of special agents were withdrawn from Eastern Europe and redeployed in areas like the Middle East, Africa, Central and South America and the Caribbean with special emphasis on small developing countries like Belize.

In the name of allegedly fighting crime several laws have been enacted in Belize that are a carbon copy of the disgraced George Bush administration’s Patriot Act. These included various forms of surveillance on the civilian population, entering homes without warrants, search and detention. Some Belizeans foolishly believed this was designed to fight crime and would make them safer; they willingly gave up their civil liberties for the evolution of Belizean-style totalitarianism under the current regime.

Belizean political leadership has been trained and conditioned from the inception of so-called self-government in 1964 beginning under London and currently Washington, to follow instructions from the metropole. This doctrine continues to shape local and foreign policy formulation despite claiming the status of an independent nation. None is more evident than Belize’s current government’s determination to force the Belizean people to go along with placing half of the nation’s land mass claim by Guatemala up for adjudication at the International Court of Justice (ICJ).

In an exclusive interview conducted in 1992, the future Belize Prime Minister Dean Barrow gave a glimpse as to how he would govern when questioned regarding “independent thought” and charting a progressive course that is beneficial to nation building. Barrow stated he believes in “objective constraints” and essentially concluded that Belize has no choice but to operate within the regional imperialistic perimeters. Now in his third and final term as Prime Minister of Belize, Dean Barrow’s entire political legacy hinges on how dutifully he follows the dictates of the metropolitan centers, rather than leading from a political base from within the nation/state, and inordinate self-interest and personal political preservation. Hence, zero attempt at divergence and homegrown progressive policies.

Belizean writer/historian Evan X Hyde has written on numerous occasions that Belize is becoming more and more like its militaristic/oligarchical neighbor Guatemala. Guatemala is a country where speaking out against the government as a citizen or journalist can lead to torture, mutilation, jail and murder. They have killed so many of their own citizens via genocide that scholars have compared this to atrocities committed by the NAZIS in World War II. In spite of Guatemala’s attempt at cosmetic surgery, in 2016 it continues to target labor unions, activists, peasant organizers, students, university professors, political opponents and progressive clerics. While some may disagree with Hyde’s assertions, it is undisputable that Belize has drifted dangerously toward a ledge that makes recent actions by the state seem predatory and fascist. These actions signal a perilous path that can only lead to one destination – national convulsion and civil war.

The targeted round up of any group of Belizeans by security agencies whether by foreign or domestic directive should not be tolerated by any Belizean citizen both at home and abroad. These type of practices and group punishment have their origin in white racism during slavery and have been perfected in countries like South Africa under apartheid, the military/oligarchy in Guatemala and the Israelis’ continued horrific treatment of the Palestinian people in the West Bank and Gaza. Underpinning all of the above despotic regimes was and is their supreme enabler – the United States of America. Much of Belize’s military, police and security agencies is now directly under the training and supervision of America. Hence, it should not come as a surprise that their methods of operations alarmingly resemble those of the rogue nations mentioned above.

Belizeans have no choice but to become critical thinkers, able to connect dots and not view certain events in isolation. There are two fundamental universal laws we must understand in order to clairvoyantly see what is affecting our society and poses a danger to our very existence. The first is the law of cause and effect – The universal law of cause and effect states that for every effect there is a definite cause, likewise for every cause there is a definite effect. Your thoughts, behaviors and actions create specific effects that manifest and create your life as you know it. Hence, our every action or inaction has consequence.

The second universal law refers to use. Our peculiar history as Belizeans involves an intentional design by our British colonial rulers to inculcate and perpetuate, via education, a distaste and hatred for the land and agricultural cultivation in us. As a consequence of this a large segment of the population, and particularly Afro Belizeans, try to do everything possible to escape the land. Successive governments over the past quarter century have failed to remove this debilitating residual condition of colonialism from the psyche of the people. So today in 2016, as a result of our not using and maximizing the land, foreigners now own more arable land in Belize than the entire population and Guatemala is poised to make its claim to half of the nation’s most valuable land mass.