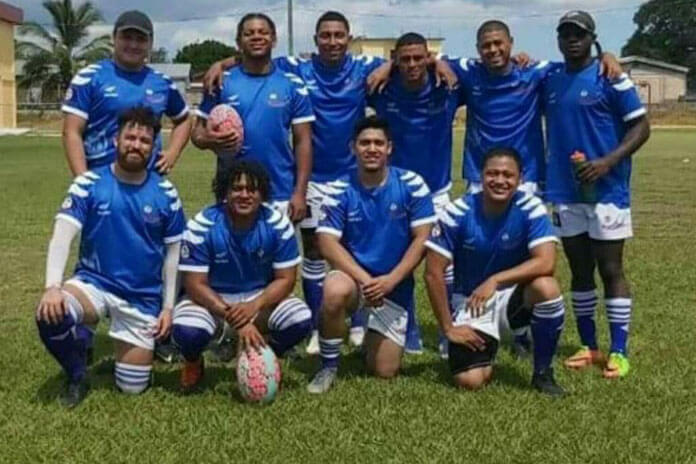 BELIZE CITY, Wed. Oct. 20, 2021– Commenting on a breakingbelizenews.com report by Ruben Morales Iglesias on Monday of this week, English pioneer of rugby in Belize, coach Tony Gillings said he was still “extremely proud of what the team achieved – considering where we have come from.” He was referring to Belize’s winless last place performance in an international tournament in Turks and Caicos Islands over the weekend.

Rugby is a relatively new sport in Belize, and in its first international outing, the Belize Men’s National Rugby Team travelled last week to the Turks and Caicos Islands to participate in the Rugby Americas North Sevens 2021 tournament which took place on Saturday and Sunday and involved nine teams from Central America and the Caribbean, namely: Jamaica, British Virgin Islands, Turks and Caicos Islands, Mexico, Barbados, Curaçao, Guyana, Bermuda, and Belize.

According to Iglesias’s report, Belize lost by some lopsided scores, although coach Gillings corrected a couple details on the first game. Losing 36-5 in their opener against Guyana, Belize’s first five points in the international rugby arena were scored by Dayton Warrior. Our other three losses were all shutouts: 37-0 to Bermuda, 45-0 to Curacao, and 22-0 to Turks and Caicos Islands.

Coach Gillings is nevertheless optimistic, noting that, “We lost our games but gained hugely from experience, in attitude and in being welcomed into the rugby family officially on the world stage. It was a first step – a hugely important step for the sport in Belize.”

In the final game of the tournament on Sunday, undefeated Jamaica crushed Mexico, 21-7, to become overall winners and thus qualify to the 2022 World Rugby Sevens Challenger Series.