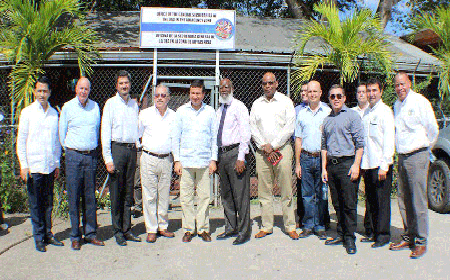 BELIZE CITY, Thurs. Jan. 28, 2016–The Ministry of Foreign Affairs today confirmed reports that officials of Belize and Guatemala had held a meeting last Friday, January 22, to discuss the road ahead in advancing bilateral relations between both countries and to reactivate the Belize-Guatemala Joint Commission – the body tasked with implementing a set of confidence-building measures previously agreed to by the parties back in 2005.

The meeting came about a week after Guatemala’s recently installed president, Jimmy Morales, spoke in his inaugural address about advancing bilateral partnerships with Belize, as well as resolving the territorial, insular and maritime differendum between the countries.

The Guatemalan delegation was led by Foreign Minister, Canciller Carlos Raúl Morales Moscoso, while the Belize delegation was led by Foreign Affairs Minister Wilfred Elrington, and included CEO Lawrence Sylvester; Belize’s Ambassador to Guatemala, Alexis Rosado; and Ambassador Stuart Leslie of the Referendum Commission and Belize’s Boundaries Unit. The delegations met at the OAS office near the Belize-Guatemala border.

The parties had signed an amendment to the 2008 Special Agreement to submit the differendum to the International Court of Justice (ICJ), pending approval via referenda in both countries. That amendment allows the countries to explore the option of having their referenda on separate dates, rather than the previously agreed simultaneous poll. The amendment was signed last year after Guatemala suggested that the poll could be held in that country to coincide with round two of the presidential elections – but that never transpired. Elrington revealed earlier this week that the amendment to allow the change in the referendum clause has yet to be approved by Guatemala’s Congress.

Earlier in 2015, Guatemala’s Congress had approved the majority of the December 2014 agreements which the foreign ministers of Belize and Guatemala had signed in Placencia, covering 13 different areas of cooperation. Those agreements were ratified by Belize’s Senate last December, and are for the most part set for implementation.

The agreements cover, for example, the environment and sustainable resource use; serving of penal sentences; equivalency of studies and the recognition of educational documents; mutual recognition of driver’s licenses; the recovery and return of vehicles stolen, confiscated or impounded illegally or inappropriately; electric power trade and transmission interconnection; sustainable tourism; harmonization of operating hours at legal terrestrial entry points; movement of students through terrestrial ports of entry; protection, conservation, recovery and return of items of cultural and natural patrimony which have been stolen, pilfered, looted, exported, imported or trafficked unlawfully; and the protection of the environment and sustainable resource use.

Following Friday’s meeting, the parties “…expressed satisfaction that they are now in a position to start implementing the cooperation agreements….”

The Commissioners have now been tasked “with developing a work plan for implementation and to explore other ways of promoting confidence and ‘neighbourliness’ between the two countries for the Ministers’ consideration.”

Since 2014, Rosado has headed the Commission, tasked with implementing the confidence-building measures between the countries. We were unable to reach him today to find out why the Commission’s meetings had been suspended until this month.

CEO Sylvestre declined to comment on the matter when we contacted him, and also declined to answer our query on whether the parties would pursue holding the ICJ referendum in 2017. He directed us again to Ambassador Rosado for answers.

A statement previously issued by Guatemala’s Ministry of Foreign Affairs said that the two officials discussed the common agenda of the countries, the strengthening bilateral relations, as well as the implementation of the December 2014 Placencia accords signed by Belize and Guatemala. Barrow and Morales also spoke of resolving the territorial, insular and maritime differendum through the ICJ. They furthermore exchanged ideas on the next steps to build the confidence of Belizeans and Guatemalans during the process, the statement from Guatemala’s Ministry of Foreign Affairs said.