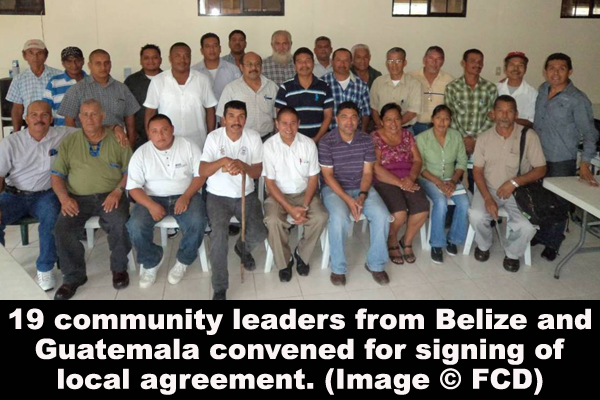 On Saturday, September 14, officials from Belize and Guatemala signed a joint agreement for the protection of the Chiquibul-Mopan-Macal and Belize watersheds.

In particular, the watersheds are deemed to be vital to the ecology, economy, food security and public health of the people of east central Peten, Guatemala and the central region of Belize, and it harbors a rich wildlife reservoir, as well as a history of the ancient Maya civilization and cultural diversity, the officials noted in the joint agreement.

“With the signing of this agreement, the 19 leaders commit themselves to undertake cleanup campaigns, reforestation and education activities; and to promote conservation activities and cooperation, exclusively for the protection and preservation of the shared watersheds,” said Rafael Manzanero, executive director of Friends for Conservation and Development (FCD), which spearheaded this initiative.

The Belizean local authorities committed to “promote cooperation with authorities from Guatemala, exclusively for the protection and preservation of the shared watersheds, and as a result will facilitate working mechanisms as well as coordinate local actions that lead to a serious, honorable and friendly work.”

The Commonwealth of Municipalities of Southern Petén (MANMUNISURP) as well as the Municipality of Melchor de Mencos and the Community Development Councils (COCODES) reciprocated the commitment for the Guatemalan side.

This joint agreement renews the first agreement reached in 2010 among 18 community leaders from both Belize and Guatemala.

“This agreement signed by all 19 community leaders is also endorsed and signed by the president of the Commonwealth of Municipalities of Southern Petén (MANMUNISURP), Sergio Diaz; the alcalde of Melchor de Mencos, Ricardo Avila, and Friends for Conservation and Development’s executive director, Rafael Manzanero”, the FCD informed.

FCD received financial support from the British Embassy for this initiative.