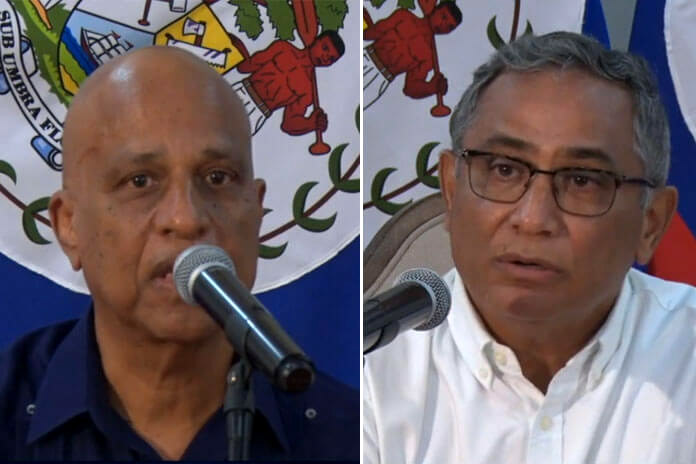 BELIZE CITY, Mon. Mar. 16, 2020– The coronavirus, or COVID-19 as the World Health Organization (WHO) has designated the new strain of the virus that was discovered last year in China, has been killing thousands of people since it moved out of China and began spreading across the world. COVID-19 is now confirmed to be in over 120 countries, causing millions of people to be quarantined in their homes in several countries. The virus has also hit the global tourism industry hard, as travel has ground to a virtual standstill, with cruise ship calls and air travel suspended.

While several countries in our region have reported cases of COVID-19 in their midst, so far, Belize has not recorded a single positive case. Nonetheless, the government has stepped up its efforts to take precautionary measures in light of the ever-expanding worldwide crisis.

At a press conference this afternoon, Prime Minister Dean Barrow and the Leader of the Opposition, People’s United Party (PUP), Hon. John Briceño, held a joint press conference in their capacity as chairman and co-chair respectively of the National Oversight Committee on COVID-19.

Briceño announced a number of precautionary measures that the committee has adopted to combat COVID-19.

Briceño said the first decision was the postponement of the SIB Census until next year, “and use of some of the resources already allocated for the census to collect data associated with COVID-19.”

“All schools will be closed effective Friday, March 20, for 14 days, which will lead right into the Easter break,” Briceño additionally announced.

Briceño stressed that this is not a vacation and parents and children must follow the government directions for safe social distance and good hygiene practices.

It was also agreed, as another precautionary measure, to limit all social gatherings to no more than 100 people.

Briceño said that these include indoor and outdoor events.

At present Belize is preventing entry into Belize of persons who reside in, or who have traveled over the last 30 days to, China, Hong Kong, Iran, Japan, South Korea and Europe, including the United Kingdom.

Briceño said that this list of restricted countries will be continuously monitored and updated as it becomes necessary.

“Today it was agreed to close all borders of Belize for passengers and only leave the northern border and the PGIA opened. So all other points of entry, the western and southern borders, will be closed,” Briceño announced, adding, “This does not apply to cargo vessels.”

Prime Minister Barrow, who recently read his last budget as UDP leader, announced today that the budget debate is “up in the air.”

The budget debate, which usually stretches out over two House of Representatives meetings, and was scheduled to be held this Thursday and Friday, might not be held, the Prime Minister announced today.

Barrow said, however, that there is still need to pass a general appropriation bill, which will include a $25 million allocation to assist the tourism industry, which was hit hard when the cruise ship companies postponed their calls to Belize last Friday.

Barrow also said that if a budget debate is held, it may only be for one day to facilitate the Opposition members of the House. The government side will forgo their right to reply.

“The Leader of the Opposition made the case”, Barrow said, “while we had hoped that the budget can be passed without any kind of rancorous debate”.

The $25 million loan will be financed by some cost-cutting measures across the government service that will amount to 2 percent of the recurrent budget. Barrow admitted that the suggestion came from the Leader of the Opposition.

“What is for sure is that we will pass the budget as originally presented,” Barrow said, then noted, “we must come up with a robust response that will assure our people.”

All together, the government will put together a financial package amounting to some $75 million in loans and grants to fight the COVID-19.

Prime Minister Barrow thanked the Leader of the Opposition and the People’s United Party for coming together with the government to face the worst crisis Belize is facing in a generation, “Perhaps I should say, my generation,” Barrow added.

Barrow said that this is one of the most frightening crises that this country has faced in a couple of generations.

“So, Sir, I salute you, I salute your party and it is a matter of the greatest satisfaction to me that we are coming together to show the Belizean people that in times of difficulties we are one,” Barrow said.