Home Highlights Why Belize is losing the war for Chiquibul
HighlightsOpinion

Why Belize is losing the war for Chiquibul 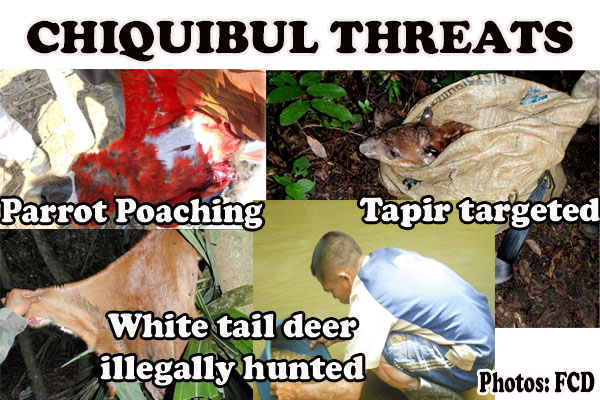 The recent tragic death of police officer Danny Conorquie has cast a spotlight on an issue that has not received the necessary attention from either the Belizean public or the government. A silent war is being waged inside the Chiquibul Forest Reserve, one that has been raging for many years. The enemy moves freely within the Chiquibul, operates with impunity and greatly outnumbers the nation’s security forces.

They are consistently encountered by the Belize Defence Force, Belize Police Department, Friends for Conservation and Development, and other Belizeans who visit the Reserve. Many media reports have been made on this enemy and images of the damage they continue to inflict on the Chiquibul are broadcast to the world.

The enemy of the Chiquibul has seized control of the forest and there seems to be nothing the Belize government can do about it. Belize is losing the war for the Chiquibul, and it is apparent that we are now losing the struggle for sovereignty over that part of Belize.

How did we get to this point? What can we do to once again establish control of the Chiquibul Forest Reserve?

A major limiting factor for the Belizean military’s operations in the Chiquibul has been a poor understanding of the Guatemalan persons that are encountered in the forest. Who are these persons? Where do they come from and why are they here? What events caused them to be desperately poor, indigent and willing to risk such hardships in the forests of Belize?

Many BDF and police officers (senior and junior), and I would posit that even Ministry of National Security personnel, are unaware of the events that have shaped the Department of the Petén. They are not aware of the destruction of Guatemala’s 21,130 square kilometer Maya Biosphere Reserve and buffer zone due to extended deforestation and illegal settlements that have appeared over the last 30 years.

Very few military persons are aware of the 36-year civil war that ravaged Guatemala from 1960 to 1996 and left thousands dead, the vast majority of these Maya, and caused many to become refugees. Still less have spent the time to learn about the history of Guatemalan land distribution which continues to keep thousands of Guatemalans poor and landless.

Xateros and illegal loggers do not materialize out of thin air; they are the products of centuries of injustice. These persons now view the Chiquibul as their only hope for survival. It is important to understand this so that we can appreciate the magnitude of the threat that we are facing.

Sun Tzu wrote, “Know thyself; know thy enemy,” and encouraged commanders to learn all they can about their enemy. The first question in the combat estimate is to know what the enemy is doing, what situation does the friendly force face and why, and what effect they have on friendly forces. Until we can adequately answer this question, the Belizean security forces will not be in a position to properly advise the government.

The National Security Strategy of Belize aims to establish “A safe, secure Belize at peace with itself and its neighbours, where the security environment allows the development of a peaceful and democratic society that utilizes its human and natural resources to ensure social justice, ethnic harmony, security, stability and prosperity.” It goes on to state that “the State must make every effort to guarantee its sovereignty and territorial integrity in the face of external threats.”

This vision has not yet become reality. Government continues to provide the bare minimum support to the security forces and there is no real effort being promoted to make the BDF and police into modern, efficient forces. Both institutions continue to be plagued by severe shortages in material (fuel, vehicles, uniforms), and suffer from poor leadership at the government level.

The death of the special constable clearly indicated that government continues to ignore warnings being issued by its partners, in particular, Friends for Conservation and Development. This murder revealed that the intelligence reports generated for that area had been ignored. Belize cannot afford this poor management of information and resources, especially in an area that has generated volumes of reports over the years.

Belizean laws have yet to catch up with the current crisis inside the Chiquibul. Guatemalan persons caught inside the reserve are very often just issued with an order to leave by the Immigration Department, driven to the western border and given a stern warning not to return. These persons are back at work in the reserve within a matter of days. It is incredibly frustrating for military personnel to see this happen after having risked their lives to detain these persons. The fact that this happens is a sign that there is no clear policy for deterring illegal activity in the reserve.

While one organization works to deter illegal activity, the others that have the legal authority to prosecute those involved in the activity are unwilling or unable to do so. We do not have loopholes in our laws so much as we have caves that elephants can pass through. There must be a concerted effort by the government to revise and improve all laws that are can be levied against persons (Guatemalan, Belizean or others) operating illegally in the Chiquibul.

Another reason being cited for the loss of control of the Chiquibul is the fact that the BDF has not been able to disengage itself from Belize City. Significant military resources have been focused on police operations for almost twenty years. Conversely, significant military resources have been absent from the Chiquibul Forest Reserve for almost twenty years. There is no clear aim to this operation. What exactly is the BDF doing – civil-military operations, operations other than war, military operations in urbanized terrain, some other type of operation?

Has the BDF unofficially become an extension of the Police Department? Bayley (1990) and Silver (2005) identify two roles as the cornerstones of police function: crime prevention and public order maintenance. Military forces, on the other hand, are war fighting institutions tasked with protecting the state and its interests through the use of deterrent effect or lethal force. In Belize we are experiencing a blurring of the police-military divide. An examination of the core functions and focus of both institutions by Greener and Fish (2011) reveals:

Is the BDF trapped in a never-ending spiral of “aid to civil authorities,” a catch-all phrase for any other type of work? In contrast, the UK Ministry of Defence has a clear policy on what they term Military Aid to Civil Authorities. In determining whether military aid is to be provided, it follows clear principles as follows: (a) where the need to act is clear and where other options have been discounted by the civil authorities; (b) where the civil authority lacks the capability to fulfill the task and it is unreasonable or too expensive to expect it to develop one; (c) and/or the civil authority has the capability but the need to act is urgent and it lacks readily available resources.

The fact that the BDF has been on this operation for such a long time indicates that there is no clear policy on the use of military resources in Belize City. This BDF operation has become permanently temporary.

Lastly, after such a long operation, one must wonder what measures of performance the Ministry of National Security is using to determine the success and effectiveness of this operation? Can the government justify keeping the BDF on the streets in Belize City and away from the Chiquibul?

The BDF, as a professional military force, employs the operations process as it plans and executes operations inside the Chiquibul Forest Reserve. Its success is debatable, as it has not been able to effectively counter the threat inside the reserve.

Military operations must be dynamic and they change to suit the nature of the threat. The US Army learned this quickly in Vietnam and in Iraq. They had to refocus their doctrine and operations in order to defeat their enemy. Unfortunately, the BDF is taking a very long time to assess the situation in the Chiquibul and to direct effective operations to counter and defeat the threat. The Belize government is not doing enough to reclaim control of the Chiquibul. It is imperative that this happen quickly before we get to the point of no return.

While you are reading this, Guatemalan xateros, poachers, loggers and gold panners are moving about freely inside the Chiquibul Forest Reserve. They move unimpeded across the border and are so confident that they are no longer fearful of engaging Belizean security forces.

There are many reasons for their presence inside the reserve – desperation, greed, social inequality. None of them are reasons that are acceptable to us. They are the front line soldiers in the war for the Chiquibul and they have been incredibly successful.

Belize is launching a weak defence, with poor knowledge, ineffective leadership, weak laws and a defence force that is otherwise engaged. If this situation does not change quickly, we should be prepared to lose the Chiquibul Forest Reserve forever.