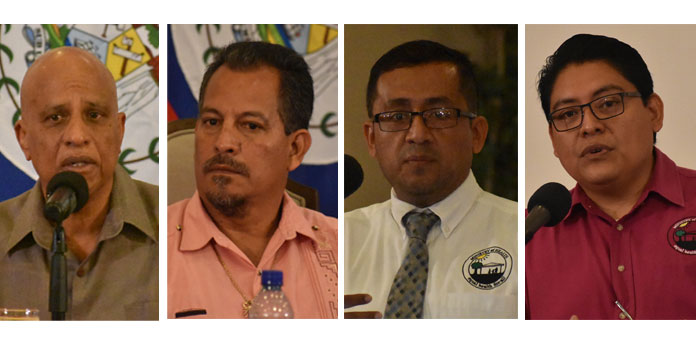 BELIZE CITY, Thurs. Mar. 12, 2019– In the wake of the World Health Organization (WHO) declaration yesterday that the respiratory disease known as coronavirus (COVID-19) is a pandemic, the Government of Belize held a press briefing this afternoon to outline its plans to combat the disease if or when it arrives in Belize.

Prime Minister Barrow began his presentation by stressing that there is no confirmed case of COVID-19 in Belize.

At a special meeting of Cabinet yesterday, Barrow said, the Cabinet confirmed the establishment of a Special COVID-19 Task Force and a COVID-19 National Oversight Committee.

Barrow explained that since Saturday, he had set the wheels in motion for these things to happen. “That is the day I called the Leader of the Opposition; the Head of the Council of Churches; Senator Salas, from the Belize Network of NGO’s, the NGO Senator; and the President of the Belize Chamber of Commerce and Industry,” he said.

Barrow said he asked the Leader of the Opposition, Hon. John Briceno, to co-chair with him the National Oversight Committee, and he has accepted.

Barrow said that the National Trade Union Congress of Belize was also invited to participate, but has not yet responded.

The day-to-day public health response will be carried out by the Ministry of Health and the COVID-19 Task Force, Barrow said.

The National Oversight Committee will deal with the economic aspect of COVID-19, he said.
A first meeting is scheduled for this Monday, at which the committee will hear from the Governor of the Central Bank, the Financial Secretary and the CEO in the Ministry of Economic Development. They, along with SSB, will map out how to deal with the impact of the crisis on employees and employers, and on all aspects of the Belizean economy.

Some of the initiatives that the committee will look at include emergency aid to workers, a possible tax deferral, a supplementary budget allocation, a moratorium on loan repayments at banks and credit unions, salary advances to public officers, and so on.

The COVID-19 Task Force will be chaired by Dr. Marvin Manzanero and will include representatives from the frontline government and quasi-government agencies.

Barrow said the task force will seek out assistance from the Cuban Medical Brigade, which is already in Belize.

“Taiwan seems to have had great success with this crisis, so we will also be seeking to borrow some of their health officials,” Barrow said.

Retired nurse Laura Longsworth, who is head of the National AIDS Commission; retired Belizean doctor Michael Vernon, who worked with the Center for Disease Control, and the head of the Diabetes Association will be pressed into service, Barrow said.

The task force will meet weekly or as often as is necessary. Barrow added that the Ministry of Health already has a COVID-19 plan which will be developed as we go along.

Barrow said that a communication strategy will be developed to provide accurate and up-to-date information to the public, regarding COVID-19.

There will be a communications expert on the team to provide that information.

Internationally, COVID-19 is continually evolving, so the government is working with our international partners, to coordinate responses and to keep updated on the latest trends and best practices, Barrow explained.

Nothing is more important than saving Belizean lives.

“These are not easy decisions to make given the astronomical impact that they would have on the economy, especially tourism,” Barrow said.

Barrow said that following the press conference he will be meeting with the health team and speaking to the Leader of the Opposition and to tourism and business stakeholders.

Shortly afterwards Barrow will announce when some or all of the measures will go into effect, he said.

“It is together we will overcome this crisis,” Barrow said as he ended his presentation.