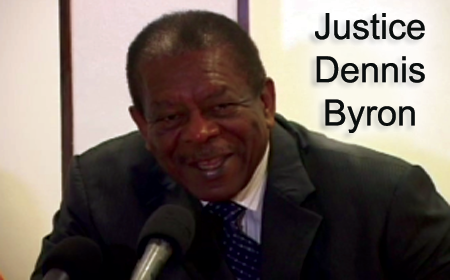 BELIZE CITY, Fri. Jan. 16, 2015–Sir Dennis Byron, president of the Caribbean Court of Justice (CCJ) – the regional court where disputes arising from the breaches in the CARICOM integration treaty can be ventilated, and the court which has for the past five years been Belize’s final appellate court – arrived in Belize this Thursday on a working visit as guest of honor for the 2015 law conference hosted by the Bar Association of Belize.

Eamon Courtenay, President of the Belize Bar Association, said that Byron’s visit to Belize is “a signal honor.”

Justice Byron was knighted by Queen Elizabeth II in 2000 and he became a member of London’s Privy Council in 2004. He was sworn in as the second president of the CCJ in September 2011 in his home country, St. Kitts.

On Friday morning, he was hosted at a press conference at the Radisson Fort George Hotel, where he was also scheduled to deliver keynote remarks to members of Belize’s legal fraternity.

Of 15 member states of CARICOM, only Belize, Barbados and Guyana have given final appellate jurisdiction to the court, in place of the UK-based Privy Council.

Since Belize joined the CCJ in 2010, all Belize cases filed after May 31, 2010 have had to be channeled to the CCJ. They have totaled 29, Byron reported. According to Courtenay, no criminal appeals have been filed at the CCJ for Belize. The vast majority of cases have been civil appeals and a new case to be heard this year was filed by Jamaican Maurice Tomlinson under the original jurisdiction of the court, under the Caribbean community law – the Revised Treaty of Chaguaramas.

The court has dealt with several Belize cases to which the state or government has been a party, and we suggested to Byron that other nations in the region might be watching and making an assessment to see how justly the court deals with cases where states are parties, in order to weigh whether they want to ascribe to the full jurisdiction of the court.

“When a case comes before our court, our objective is to provide a just and fair result. The political consequences are irrelevant,” Byron rejoined.

Byron told the press that the CCJ does not lobby or market itself to Caribbean states. He said that it does its work in a transparent manner, to provide a clear view of how the court operates, and it makes multimedia transcripts available on its website by the end of the day. Byron explained that the CCJ has adopted a policy of providing information to the public, and it hopes that this will be enough to give people confidence in the operations of the court.

Sir Dennis Byron announced that sometime within the first half of 2015, the CCJ will hold its first sitting on Belizean soil. He said that the logistics are currently being worked out, and he declined to cite which case would bring him and his colleague justices to the Jewel.

New cases listed for Belize in 2015 include the challenge of the Jamaican LGBT activist, Tomlinson, to the immigration laws of Belize and Trinidad, as well as the appeal in the Maya land rights case filed by 23 villages of Toledo.

Byron declined to discuss any of the pending cases listed for Belize, so we asked him to explain how those Belize cases which have already been heard by the CCJ have helped to build legal jurisprudence for the region.

Byron acknowledged that the Belize cases have been very significant, and many of them have raised very important legal precedence.

“That’s the subject of my talk at lunchtime today. Mr. Courtenay gave me a very hard task because he asked me to address this topic, but he only gave me fifteen minutes. But nonetheless, I was hoping to develop just that theme today, to demonstrate the way in which jurisprudence deriving from the cases in Belize have made an important contribution to developing jurisprudence in our region,” he replied.

At the law conference, titled “Reforms, Rights and Remedies,” Justice Dennis Byron delivered the keynote address on, “The Development of Caribbean Jurisprudence with Emphasis on Belize.”

Justice Byron cited the case of the Attorney General of Belize versus Florencio Marin, Sr., and Joe Coye, former ministers of government in Belize, as cases that are not only novel but which also strengthen good governance in that they established that a case for misfeasance in public office could have been brought against the ex-government officials.

Another case from Belize which has helped to enrich Caribbean jurisprudence was that of Philip Zuniga et al versus the Attorney General of Belize. Byron cited the case as one which demonstrates the importance of the supremacy of the Constitution, since sections of the Supreme Court of Judicature Act were found to not be in compliance with the Constitution and had to be modified by the Court.

He also pointed to two other CCJ cases from other states which have relevance for Belize: Trinidad Cement v Guyana, which demonstrated that under the Revised Treaty of Chaguaramas, which establishes the Caribbean Single Market and Economy (CSME), persons or companies who originate in one state could not only file suit at the CCJ against their state but also against another CARICOM member under the court’s original jurisdiction, which allows it to adjudicate matters having to do with the CARICOM treaty. Another regionally important case which he said gives the region guidance is the case of Shanique Myrie of Jamaica, who successfully sued Barbados at the CCJ after she was cavity-searched and deported from that country. (The CCJ awarded her damages equivalent to roughly BZ$80,000.)

Over the course of Friday’s law conference, a wide range of other topics were discussed. The conference opened with a presenter from England who spoke on digital assets: “Things like if a person dies, suppose they leave a will or if they don’t leave a will, who has a right to contact Gmail [or] Yahoo to get their password? Who has the right to their Facebook and that type of thing?” Courtenay explained.

He said that criminal reform was also on the conference agenda, such as the reforms to allow for the anonymity of witnesses. Lawyers would also discuss rights and remedies of persons pursued by creditors, as well as appointments of receivers and the rights of receivers, he added.

Courtenay pointed out that Belize’s rules on divorces, custody, etc., are over 80 years old and not fit for today’s circumstances. Those rules were also discussed at the law conference.