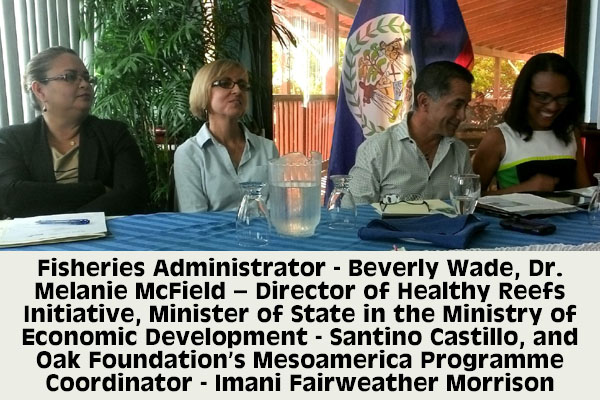 The 2014 Eco-Audit just released today by Healthy Reefs and PricewaterhouseCoopers (Costa Rica) announces that Belize has maintained the top-ranked position with a score of 3.2 out of a possible 5.0, which it also scored in the last 2011 eco-audit. That equates to a “C” – fair but not good enough. Dr. Melanie McField , Director of Healthy Reefs Initiative, said that Belize improved in only 1 of the 28 line items on which it was assessed – an indication that “we need to crack the whip” and “get off our ‘tush’” – as the pace of putting into place measures to protect the barrier reef needs to be picked up.

What is an eco-audit? A brochure detailing the assessment—which also includes our immediate neighbors: Mexico, Guatemala and Honduras—says it scored Belize and the other countries on the basis of seven themes, 28 indicators and over 300 supporting documents. It is a systematic review by a group of countries to see how well they are performing when it comes to putting in place measures to improve the management of the reef.

McField told Amandala that the eco-audit is distinct from the report card on the state of the reef. The last report card said that most of the reef was in a “poor” state, but early indications are that the health of the reef is rebounding.

One of the major threats to the health of the reef today, though, is waste disposal.

“We are most worried about the sewage contamination,” McField told us.

On a regional scale, the score was very low for this theme – at 2.3 for the countries assessed. Although Belize’s score was substantially more, at 3.0, the country still faces major challenges reducing upstream watershed pollution from sources such as livestock, agriculture, tourism, and deforestation.

McField noted that pulverized wastes from what are likely to be cargo ships which traverse the Caribbean make their way into our sea, compounding the problem of inadequate treatment of sewage and other wastes originating from land sources.

She said that despite major developments in tourism here, improved sewage treatment has lagged behind, and this is among the issues which Belize will have to start tackling.

Another disappointment for Belize was its score on coastal zone management, for which it received a score of 2.3. The main reason for the low score is that Belize has not yet adopted a plan for the management of its coastal zone – a plan which has been in the works for several years.

Roberto Pott, Healthy Reef Initiative’s Belize coordinator, told Amandala that while the technicians have worked diligently on the plan, it has not yet received the executive “green light” it needs to be put into full effect.

“The bottom line is we don’t have a plan. Unless the minister approves that plan, it’s still just a document frozen in space,” said Pott, adding that there is a dire need to get it adopted. However, it appears that the matter is complicated by competing interests.

“There are two sides to the coin: one where the conservationists think that the plan is a little too liberal in promoting development; and developers argue that it does not allow for development. There has to be a compromise and the plan is fair in the compromise. We want to see the final plan adopted by the Government,” Pott urged.

We asked him how important it is for the plan to be in place, against the backdrop of imminent coastal developments, such as the US$100 million Stake Bank cruise port off Belize City, the US$50 million Norwegian Harvest Caye development planned for southern Belize, as well as plans for a marine cage farming facility also in the Belize City area for the production of an exotic species known as the red drum.

“If you want to use a comparison, Belize City is a good example that there have been good plans but no one wants to stick to the plan, so you have a beach next to a sewage pond, bars next to schools – no playgrounds… We need to be able to set aside …public spaces for tourism but we cannot have it piling up on each other and going about it in a makeshift way,” Pott said.

The area in which Belize received its lowest score of 1.8 was for the sustainability of the private sector. Most glaring was the indicator which demonstrated that Belize lacks incentives from the government to provide for conservation and sustainable businesses. Belize is also falling short in developing voluntary eco-standards and the adoption of seafood eco-labeling programs.

Santino Castillo, Minister of State in the Ministry of Economic Development, who is also a prominent businessman of Belize City, gave the nod at today’s launch of the eco-audit that he could help move those things along.

On global issues – such as Belize’s engagement in international and regional treaties that support conservation – Belize scored extremely high, but it received a very low score on the execution of research to identify and map reefs most likely to be resilient to warming seas and coral bleaching.

Belize obtained its highest score for the theme of research, education and awareness – 4.8 of a possible 5.0.

This was highlighted by Oak Foundation’s Mesoamerica Programme Coordinator – Imani Fairweather Morrison, who cautioned about the loss of marine resources.

“The reality is the rest of the world still has not recognized the importance of our oceans, they still don’t believe that it’s under some grave threat, because whenever you see a glossy wonderful photo of how gorgeous the sea looks, it’s hard for people to comprehend that we’re really losing resources – biodiversity – in our lifetime,” Morrison said.