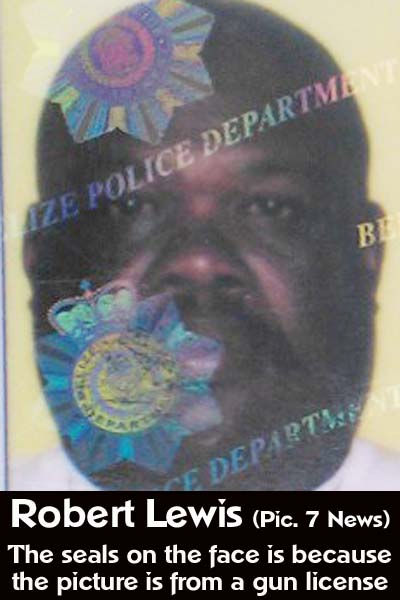 He thought Belize City was too dangerous, but death found him in Belmopan

The last of the weekend’s terrible, deadly violence occurred this morning, Monday, in the Maya Mopan area of Belmopan in a remote area sometime between 1:20 and 1:30.

Robert Lewis, 53, a retired Belizean-American and his wife, Orsula Patnett Lewis, 47, were in their home, a large, imposing, burglar-barred residence, when an armed, masked bandit breached their security and gained entry into the house.

The gunman first went into the bedroom of Orsula, who was sleeping in the upper flat in the house.

Orsula Lewis told police that she was ordered to lie on the floor and the gunman tied her hands and feet and threatened to kill her. He then demanded money and guns from her.

Orsula said that she pleaded for her life, and the man then left her and went downstairs, and shortly after she heard her husband screaming for help.

She managed to untie herself and in desperation, jumped over the balcony of the second floor, a long drop to the ground, badly hurting her shoulder in the process.

Her neighbors heard her shouting for help and ran to assist her and her husband, but the thief had already escaped.

When police arrived at the house at around two-thirty, they discovered Robert Lewis already dead in the theater room on the lower flat of the house. His throat had been slashed and he had been stabbed multiple times in the neck. While the couple had a wide assortment of expensive jewelry still at the house, their attacker only took with him about $275.

He also left behind bloodstains which police believe were his when he injured his hand on the knife blade and on the fence when he jumped over it to escape.

The stately house, which is the only structure of that magnitude and value in the entire area, was built by the couple, according to Orsula’s sister, Martha Patnett, after years of toiling and saving in the United States.

Martha said that the couple chose Belmopan over Belize City to retire because of the rise in crime in the old capital. But little did they know that crime would seek them out in the middle of the night at the place they felt safe in, where they called home.

Belmopan police are following one possible lead and are investigating a former employee who worked with Robert in the construction field, with whom he had had a dispute three months ago. Police have two theories: either the attacker had a key to the main entrance of the house, or he waited for Robert to go outside to feed his dogs before pouncing on him.

Before leaving Belize to live in the US 20 years ago, Robert Lewis worked as a taxi driver at the Cinderella Taxi Stand in Belize City.