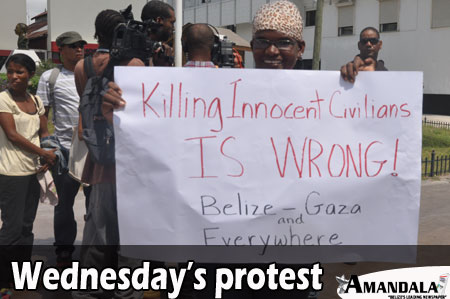 BELIZE CITY—Modern-day Israel has occupied the territory on which it presently sits since it defeated the Egyptian army in the June 1967 war and took control of the Gaza Strip, which was once Egyptian territory.

Since then, as a result of various treaties signed and continuing expansions of Israel’s settlements, the Palestinian people, who once lived on the land that the Israelis now rule, have been driven into a tiny, concentrated strip of land, without many of the rights most nations have.

Yet, they are determined to forge an independent state, and militants among them have used tactics such as the firing of rockets against Israel to assert their rights as a people.

Israel’s response has typically involved using far more powerful and devastating weaponry that cause massive casualties – most of them civilians, and many of them children.

In the past few weeks, this is exactly what has happened. Israel has been dropping bombs in areas of Gaza where there are many civilians, and the footage on social media and on the television screens have been so heart-wrenching that protests against this use of force have been taking place in countries all over the world.

Yesterday, about 25 Belizeans walked around Belize City’s Battlefield Park carrying placards, denouncing the latest outbreak of war in the Gaza Strip between Hamas and Israel, which has claimed almost 1,900 Palestinian lives (primarily civilians) and a little under 70 deaths (mostly soldiers) on the Israeli side.

The protest was organized by the local Muslim community, which has decried the slaughter of innocent civilians, women and children in the conflict.

Former Belize Prime Minister Said Musa was walking the protest line in the scorching heat. Musa told reporters that Belize, as a part of the world community, should pay attention to what is happening in the Gaza Strip.

Musa said: “The Gaza situation should shock the conscience of the world, and that is why I’m out here to protest; also, of course, the fact remains that I have Palestinian heritage in my upbringing. My father was a Palestinian; my family from my father’s side have been dispossessed from their land and driven out of their land, so I have every reason to show my concern.”

The artist and educator, Yasser Musa, Said Musa’s son, also weighed in on the situation and drew parallels with the home-grown challenges that Belize has been experiencing.

“We are seeing yesterday and the day before how extreme things have become, where you have, in one sense, it takes months to go through a circus to try and get Penner arrested, and have the government orchestrate all kinds of hoops and ridicule the people who are trying to take a stand,” Musa explained.

He added: “And then you see one day after, the innocent workers being abused and trampled on and put behind bars as if it’s a joke. And so when you have these kinds of extremes, history didn’t begin yesterday and we need to understand that unless we take a side, whether it is a side for the Palestinians or a side for the workers, then we will just be told what to think and told what to do.”

The organizer of the protest, Imam Nuri Mohammed, told reporters that life is sacred and that the scriptures say that wherever a human being is killed unjustly, it affects all of humanity.

“It is important that Belizeans who have been watching this thing unfold on television over the last 28 to 30 days find some means by which we could express that this is wrong,” Mohammed said.

“We recognize that what is happening in the Gaza is a crime against humanity,” Mohammed stated.

The continuous bombing of schools, of places of worship, is inhumane. No human being should sit back and tolerate what is happening in the Gaza Strip, said Mohammed.