The drug, found in 69 bales, weighed about 2 tons 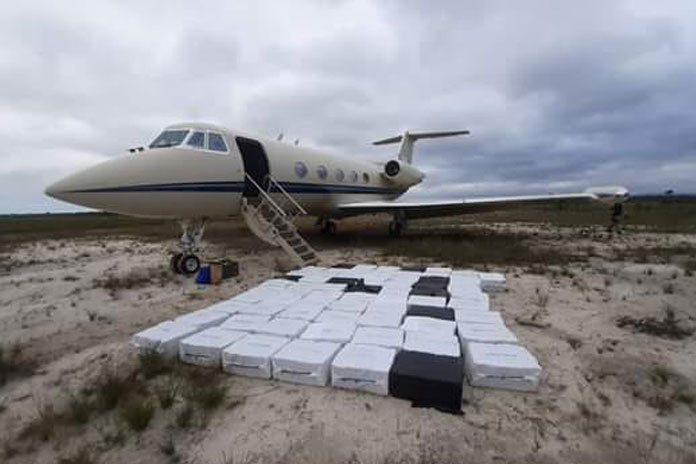 BELIZE CITY, Thurs. Feb. 27, 2020– A jet plane that was tracked from Venezuela landed on an off-road off the Coastal Road at about 4:00 this morning, and a composite patrol consisting of police officers and soldiers of the Belize Defence Force managed to find the jet before the cocaine inside it could have been unloaded and the plane destroyed, as is usually done when drug planes land on clandestine airstrips.

The crew, however, managed to escape by vehicle out of the area.

In the jet, police found 69 bales of cocaine, in which were 2,070 parcels with a total weight of about 2 tons. 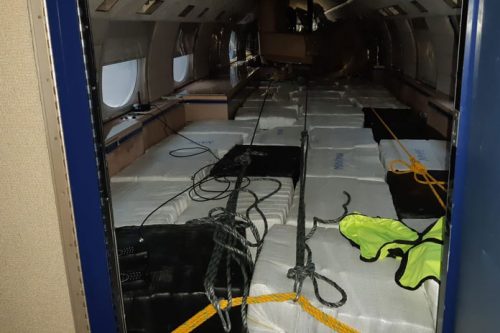 Cocaine inside the plane

Commissioner of Police Chester Williams said that the drug bust is so far the largest in the country in recent times. The cocaine was taken, under heavily armed guard, to an unknown location for safe keeping until it is destroyed, and the jet plane was secured by the Ministry of Defence.

During a police press briefing that was held this evening at the Queen Street Police Station, Commissioner of Police Chester Williams said that at about 12:30 this morning, a plane leaving Venezuela was tracked coming to our country, and police were alerted and they deployed to likely areas where the plane could land.

There was also collaboration with another neighboring country which tracked the plane when it entered our airspace, and that country deployed an air asset while monitoring the plane.

The team deployed to the area, and on their arrival they saw the G2 jet plane intact, but abandoned, and they also saw vehicle tracks, which appeared to indicate that the crew escaped in a vehicle. The area was thoroughly searched, but the crew had escaped.

Police also found two 5.56 M16 rifles. Williams believes that those who were involved in landing the plane must have heard them or saw them coming.

Williams said that no money was found, only the cocaine. Fingerprints were lifted from inside the plane and were sent to INTERPOL for possible matching and identification. The owner of the land on which the plane landed is not in Belize, and so police must try to find the owner and get his permission to destroy the road so that it cannot again be used by the traffickers to land their planes.

Jules Vasquez of 7News, in speaking to police, suggested an estimated value of the large amount of cocaine as being in the region of BZ$120 million, and the value was not refuted by police. It appears to be the largest drug bust in Belize’s history.

This is the third G2 jet that traffickers have landed and abandoned in Belize.