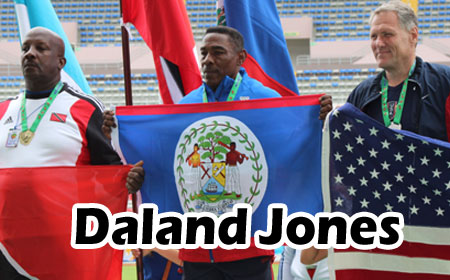 In winning the Gold for Belize, Daland said he had qualified to participate in the World Championships in Leon, France, in August, 2015. “When a group of mostly Costa Rican fans saw the chart with Belize leading in the Shot Put, they began cheering for Belize. They were chanting ‘Be-lice! Be-lice!’; and when the second place American made his final throw, and they saw I had won, they erupted in an even louder chant and celebration for Belize. It was an awesome feeling, seeing the Belize flag above all others, and I was emotional and humbled to be able to win the Gold for my country.”

The NCCWMA had competitors from all over, said Daland, as it was the first hemispheric masters championship. The largest contingent in the competition was from host Costa Rica, followed by the USA, and then Canada. While some athletes were invited from outside the region for this event, next year’s World Championship in France will actually have representation from all nations.

FC Belize will be back

Daland is the same Daland Jones who was part-owner of the FC Belize football club along with his partner and friend, the late Lionel Welch. Daland told us today that, following a period of some difficulties with clarifying the club’s status with the FFB, he is now making preparations to have FC Belize once more represent the Belize District in the upcoming Premier League of Belize competition.

“I don’t make a lot of noise,” said Daland, “but I have always been a serious competitor, going way back to my teenage days playing with the renowned Queenspark Rangers around 1973-75, and playing forward on the Stann Creek District Selection who won the Interdistrict championship in 1976. Aside from my involvement with football, for the past few years I have been doing some work in track & field and body building; but a lot of people don’t know that I can lift up to 290 lbs. My strength helped me with the Shot Put.”

Asked if he still plans to “bring out” FC Belize in the next Premier League of Belize competition, Daland said, “Most definitely; we are moving forward with the club’s registration right now.”

On Sunday morning, about 40 players, including some from the Cayo district, were seen working out at the Hour Bar football field under coach Marvin Ottley. Ian Jones, former FC Belize manager, told us on Sunday morning that the new team, Verdes-Belize City FC, will be a full professional club, with an “A” and “B” team, as well as a U-17 and U-15.

While the MCC pitch in Belize City still needs much work, there is a lot of new energy bursting on the Belize football scene, with the young Wagiya FC from Dangriga making waves after an impressive 3-0 loss to the National “A” Team, the emergence of the unique Verdes-Belize City FC experiment, as well as the return of FC Belize, featuring some of their veteran stalwarts partnered with a bunch of bright young prospects.

Notwithstanding their proposed “4-year plan,” hopefully, the FFB and the PLB can work out their differences and look to harnessing and channeling this exciting new energy into a well managed, top level tournament for our football hungry fans.