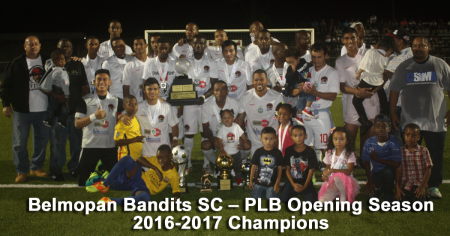 BELIZE CITY, Thurs. Jan. 5, 2017 – – After all the hype and anticipation surrounding the epic New Year’s Eve clash between Premier League of Belize (PLB) 2016-2017 Opening Season regular season #1 seed Belmopan Bandits SC, and #2 seed BDF FC, football fans were treated to a not-so-exciting game, that lost its thrill, except perhaps for the die-hard Bandits fans, a few moments after the opening whistle.

As a serious football fan, I acknowledged that Bandits played the better ball, but BDF knew how to defend. Their mud-and-water aided surprise 1-nil win in game 1 of the finals, meant that the intrigue of the game at the Isidoro Beaton Stadium would be, how long BDF could hold out the high-powered attack of the Bandits; and could they hold on for ninety. That was the question. But before I had finished my line-up notes, apprising the formations of both teams, the game had been decided.

After a centering pass toward a bunch of players, attackers and defenders, there was reportedly a hand-ball just inside the BDF eighteen around the second minute of the ball game. And referee Irfan Basdmir immediately indicated “penalty.” BDF captain Vallan Symms appealed passionately, suggesting from his actions that stopper Leon Cadle had been pushed from behind, causing the ball to hit his arm accidentally. Basdemir would hear none of it.

Bandits sweeper Elroy Smith converted. And with the aggregate score now equaled at 1-1, the rest of the game was a foregone conclusion; because BDF was now forced to attack, and no way could they match Bandits on their home field in an open attacking game.

After Smith’s penalty conversion (3’), the Bandits midfield genius Jordy Polanco went to work, and before half-time, the Bandits had added 3 more goals, from strikers Aloisio Teixeira (12’ & 34’) and Jairo Roches (27’), for the 4-nil lead. BDF regrouped somewhat in second half; but it was over; it had been over from the second minute, thanks to BDF bad luck and some stern officiating. With the 4-nil victory, Belmopan Bandits SC are the Premier League of Belize (PLB) 2016-2017 Opening Season champions, having won back-to-back PLB championships, and an almost certain berth in the 2017 CONCACAF Champions League.