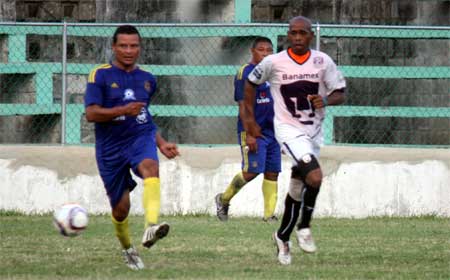 BELIZE CITY, Mon. May 13, 2019– Opening season champions, Bandits Sport FC will represent Belize in the CONCACAF Champions League tournament later this year, regardless of what happens on Saturday night in San Pedro; but the San Pedro Pirates FC will challenge the Bandits for the Premier League of Belize (PLB) 2018-2019 Closing Season championship in game 2 of their home-and-way series at the Ambergris Stadium on Saturday night.

In game 1 of the finals series this past Saturday night at the Isidoro Beaton Stadium, the defending champions held serve with a 1-nil victory over the Pirates, courtesy of an early goal (5’) by defender Humberto Requeña, who trailed an attacking effort by teammates Georgie Welcome and Trimayne Harris, and found an open space just beyond the penalty spot to drive back a rebounding roller past Pirates keeper Zeron Sagastume for his only goal in this Closing Season.

The Bandits are 9-time champions, and would not mind making that 10; while the San Pedro Pirates are on their first ever trip to the PLB final, and are intent on going all the way.

It’s anybody’s game on Saturday. The reigning champions, the Bandits have been there before; but then, they are usually the top seed, and are accustomed to clinching the championship at home. San Pedro finished one point ahead of the Bandits in regular season, thus they have the home field advantage in this final series; and their enthusiastic fans will give them extra energy.

In their first regular season meeting in Week 7 at the Ambergris Stadium, the Pirates defended home field with a 2-1 win over the Bandits; but the Bandits returned the favor in Week 14 at their Isidoro Beaton Stadium with a 4-2 victory.

Unlike the situation in NEBL basketball playoffs, where the visiting teams have had success, the San Pedro Pirates vs Bandits Sport series so far this season has favored the home team. On Saturday night in the final 1st leg, the Bandits were 1-nil winners at the Isidoro Beaton. This Saturday night, the Pirates will try to overcome that 1 goal deficit to come away with a victory and the championship at their Ambergris Stadium.

In the goal scoring department, it will be the Bandits’ Georgie Welcome, Trimayne Harris and Jerome “Jarro” James against the Pirates’ Facundo Garnier, Anderson Cordoba and Luis Valdez; Bandits’ midfield dynamo Kevin Vicente will clash with the Pirates’ general Jesse Smith; Dalton Eiley will be sweeping for the Bandits, while Asrel Sutherland anchors the Pirates defence; and Zeron Sagastume will try to protect the Pirates’ goal; while at the other end, the great Shane Orio will try to hold another shutout in goal, and clinch his first championship as player/coach of the Bandits.

According to tournament rules, the “away-goal rule” is NOT in effect for the finals, so an aggregate tie in goals would result in overtime, and then penalties if necessary.