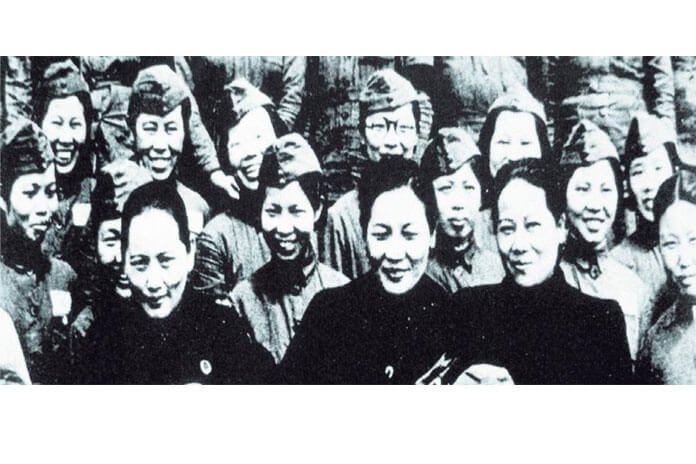 Dec. 6, 2019 10:46 am ET (The Wall Street Journal)– Once upon a time, a wealthy man lived in Shanghai with his devoutly Christian wife, with whom he had three sons and three daughters. The girls grew up to be educated, cultured and stylish, and their family’s money and status attracted many aspiring suitors. In an era when China was experiencing significant political upheaval, each sister married an influential man and secured her position at the top of society. Their selection of husbands appeared to crystallize an essential aspect of each woman’s character, as summed up by an oft-repeated saying: “One loved money, one loved power and one loved China.”

So goes the fairy tale of the Song sisters, whose life stories are the subject of Jung Chang’s “Big Sister, Little Sister, Red Sister: Three Women at the Heart of Twentieth-Century China.” Ms. Chang in recent years has written biographies of divisive figures in modern Chinese history. In “Mao: The Unknown Story,” co-written with her husband, Jon Halliday, she provided an unforgiving account of Mao Zedong’s life that depicted the Communist leader as an evil tyrant on par with Hitler and Stalin. Her next book, “Empress Dowager Cixi: The Concubine Who Launched Modern China,” took a widely reviled figure—Cixi has long been condemned for fiddling while 19th-century China burned around her—and argued that she was, in fact, a modernizer ahead of her time.

Ms. Chang seems to delight in the opportunity to “discover” new facts about famous people. There is not much that is revelatory in “Big Sister, Little Sister, Red Sister,” but her account of the Song sisters takes the trio beyond the reductive assessment by which they are most widely known. She treats each as a unique individual who deserves to have her story told.

Charlie Song traveled to the United States in the 1870s, converted to Christianity and studied to be a missionary before coming back to China. Upon his return, he married Ni Guizhen, daughter of Shanghai’s most prominent Christian clan. Between 1889 and 1906, Ni gave birth to six children, including the three Song sisters—Ailing, Qingling and Meiling (Ms. Chang uses slightly different transliterations for some names). As his family grew, Charlie resigned his mission post and went into business. He was determined to earn enough to give his sons—and, more unusually, his daughters—an American education.

His ventures prospered, and in time Ailing, his eldest daughter, proved to share her father’s aptitude for turning a profit. After moving to the U.S. to study at Wesleyan College in Georgia, she came back to Shanghai and worked as an assistant to her father’s friend, revolutionary leader Sun Yat-sen, who quickly became smitten with the young woman. Ailing was put off by the much older Sun’s romantic pursuit of her and distanced herself from him, falling in love with and marrying businessman H.H. Kung. Ailing, Ms. Chang notes dryly, “was the brains in her marriage,” and together she and Kung would grow extremely wealthy.

After Ailing’s rejection, Sun turned his attention to middle daughter Qingling, also a Wesleyan graduate. Qingling was soon swept up in Sun’s revolutionary efforts and swept away by his romantic attentions. Her parents opposed the match: Sun was 26 years older than Qingling, and already married with children. But Sun cast off his wife, and one night in October 1915 Qingling slipped away from her family home to board a ship and elope with him in Japan, where he was regrouping after a political defeat.

Qingling’s early infatuation with her husband did not endure. In 1922, Sun was locked in a battle with a political rival, who sent an army to attack the couple’s estate in southern China. A pregnant Qingling volunteered to stay behind while Sun sneaked out; when Sun failed to send word that he had escaped safely, she became trapped in the house and finally fled under steady attack by the oncoming soldiers. Qingling suffered a miscarriage during the ordeal and realized Sun was not the noble hero of her fantasies but a vicious politician willing to sacrifice his pregnant wife. Until Sun’s death three years later, in 1925, Qingling asserted her right to stand beside him as a full political partner. She transformed herself into “Madame Sun Yat-sen, “ the title by which she would be known for more than half a century.

While Ailing and Qingling settled into their marriages, Meiling spent her teenage years in the U.S. and became thoroughly Americanized. She graduated from Wellesley College in Massachusetts and returned to Shanghai in 1917. She occupied herself with a nonstop social calendar and “her busy romantic dalliances,” taking up with and then rejecting a string of prospective husbands. When she did finally marry, in 1927, it was at the behest of Ailing, who possessed a shrewd political mind. Chiang Kai-shek was commander-in-chief of the Nationalist army and a rising star in the party. Though Chiang had both a prior wife and a long-term concubine, Ailing contrived to introduce him to Meiling. Chiang understood the benefits of marrying into the Song family, and Meiling—beautiful, poised and, unlike Chiang, a fluent English-speaker—would make an ideal wife for a politician with high aspirations. The pair quickly wed.

The three sisters had always been close, but Meiling’s union with Chiang put her at odds with Qingling, who had become a supporter (though not official member) of the Chinese Communist Party. As Sun’s widow, Qingling embodied China’s revolutionary past, and her presence provided legitimacy to the struggling CCP. Qingling despised Chiang, who led China throughout the 1930s and steered the country through war with Japan from 1937 to 1945—with Meiling as his glamorous first lady.

Qingling’s bond with her family became permanently ruptured after Chiang and the Nationalists fled to Taiwan, driven from mainland China by Mao and the CCP. When Mao announced the founding of the People’s Republic of China in Beijing on Oct. 1, 1949, Qingling stood with him atop the Tiananmen rostrum as a vice-chairwoman of the new government. She died in 1981, having never reunited with her sisters.

Ailing and Kung, meanwhile, moved to Long Island, N.Y., and lived a devout and comfortable lifestyle. On Taiwan, Meiling found the purpose that had eluded her as a Shanghai society girl. She threw herself into first-lady duties and “exercised benign influence” on the ruthless Chiang, who died in 1975. She then moved to New York’s Upper East Side, where she resided until her death, at 105, in 2003. (Ailing died in 1973.)

Ms. Chang admirably strives to flesh out the inner lives of the Song sisters and treat them as more than simply the wives of important men. Indeed, each woman could have been a formidable figure in her own right, had times and opportunities been different. From a distance, it might have appeared that the Song sisters were living a fairy tale. But at the end of “Big Sister, Little Sister, Red Sister,” the question remains: Did they all live happily ever after?

—Ms. Cunningham is co-author of the third edition of “China in the 21st Century: What Everyone Needs to Know.”