As of 8:40 this morning, Thursday, 9 inmates had been captured, thanks to the joint efforts of the Police Department and BDF, leaving 19 prisoners on the run. News just in, however, indicates that Joel Sierra, one of the masterminds of the prison break, and 4 other prisoners, have also been recaptured near the Mile 25 community on the George Price Highway, which would bring the total number of prisoners who are still on the run to 14.

The 14 prisoners on the run include two other prisoners said to have been the masterminds of the escape, along with Joel Sierra. They are Carlos Montejo and Elser Oseguera.

A manhunt for the remaining fugitives on the run is currently being conducted by special teams in the Belize Police Department and the Belize Defence Force.

As the plot thickens, the suspicion that the largest jailbreak in Belize’s history was an inside job has been confirmed by a captured prisoner. In a leaked video recorded by law enforcement, Christopher Bradley, an escaped prisoner who was detained on the Coastal Road, made a shocking allegation — that the mass prison break was an inside job facilitated by two prison guards chummy with the mastermind, Carlos Montejo.

On Tuesday afternoon, escapee Akeem Tillett was shot and killed in a firefight. Reports are that the escaped prisoners fired on police while they sat in a vehicle on the Coastal Road. The officers sustained some injuries, but returned fire in the direction from which the shots came, and after the exchange was over, they found the lifeless body of Tillett, and next to him, the assault rifle that was stolen from the prison.

Four escapees were also captured at that point.

The series of dramatic incidents and captures all started with the historical jailbreak, which occurred at around 6:00 o’clock on Monday evening, just hours before the Belize Central Prison was scheduled to enter a total lockdown in response to a COVID-19 outbreak.

Carlos Montejo allegedly partnered with prison guards and two other inmates to perform this daring escape. The 28 escapees reportedly fled from the Kolbe Foundation-managed prison under the dark of night, armed with a stolen assault rifle and using three captured prison guards as human shields.

Virgilio Murillo, CEO of the Kolbe Foundation, which manages the prison, has summarized what their investigations thus far have revealed. He said that a prison guard connected to the Administrative Segregation Building was lured to a cell by Carlos Montejo. That prison guard was knocked out, bound and gagged.

The guard was stripped of his uniform and penknife, which was used by the prisoners to hold up a second prison guard from the same building, whose uniform was also taken before he was bound and handcuffed in cell number 5.

“The inmate with the knife then climbed up the stairs to the tower, and he relieved the officer of the M23 rifle and pretty much escorted him down at gunpoint, and also locked him up in the cell with the other two,” CEO Murillo said.

All this transpired before the actual commencement of the breakout, at about 1:00 p.m. on Monday, in broad daylight.

Reports are that the prison guards were held hostage for about 5 hours, until sundown, when the escape plan was put into motion.

Carlos Montejo reportedly was assisted by Elser Oseguera and Joel Sierra, who co-masterminded the escape strategy and released 25 other prisoners.

“Of the escapees, twenty-five are Belizean, eleven of whom were either convicted of, or in remand for, murder, and others are for varying degree of crimes. The other three are Guatemalan nationals,” Commissioner of Police Chester Williams said.

Commissioner Williams also warned persons who might be harboring the inmates, and cautioned them that it is a crime to assist escaped prisoners. He also appealed to motorists driving on the highways to be extra vigilant and avoid stopping for any person on the road.

In an effort to aid the joint effort of the Police Department and the BDF, citizens are asked to call 911 or 922 to report any information on these escapees.

Commissioner Williams also said, “I don’t foresee them running from the long arm of the law for too long. And if it is that we have to be continuously pursuing them, upon being caught, the fact that they are armed can cause things to go the opposite direction.”

The nationwide manhunt for the 14 remaining fugitives continues, and more captures are expected shortly. 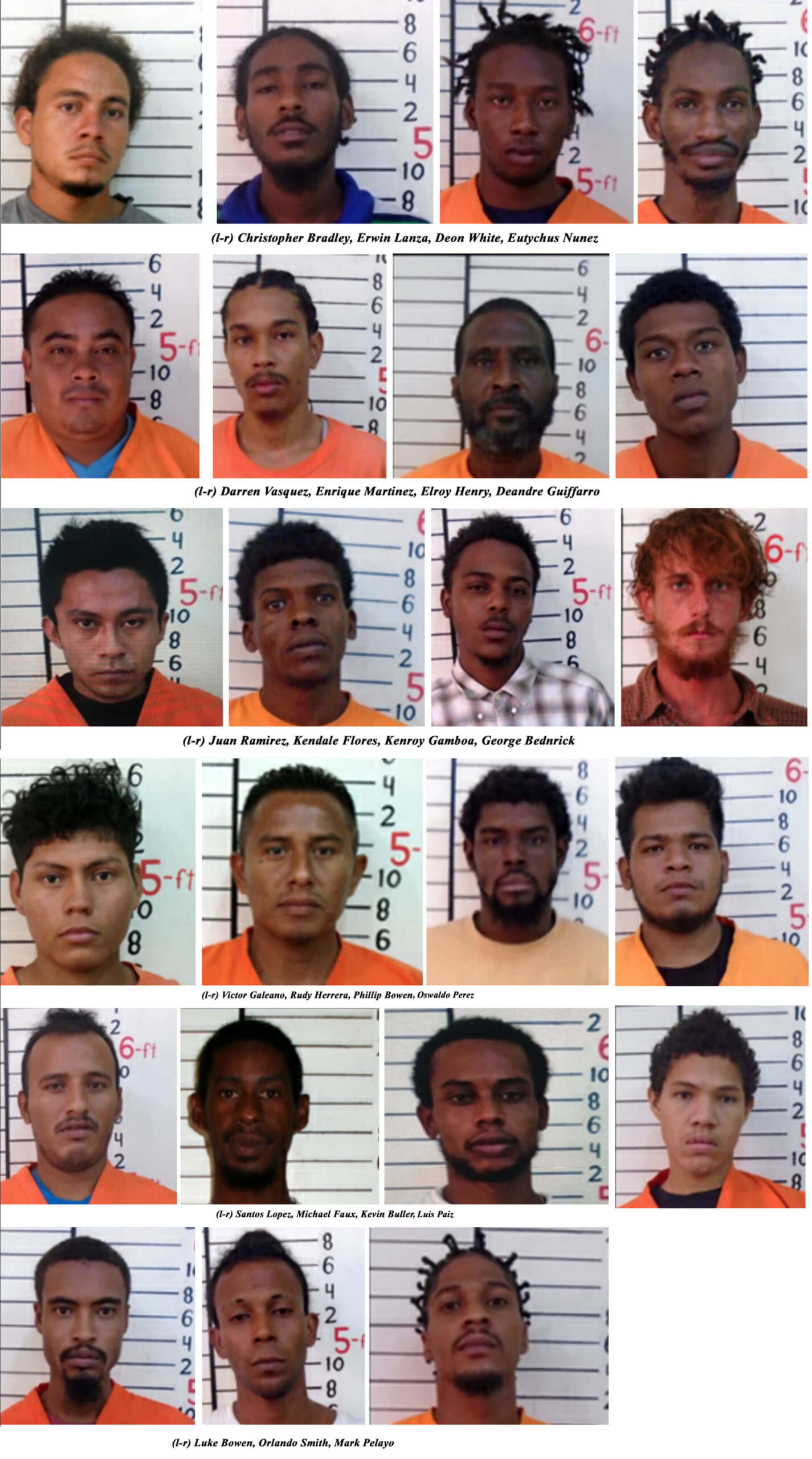