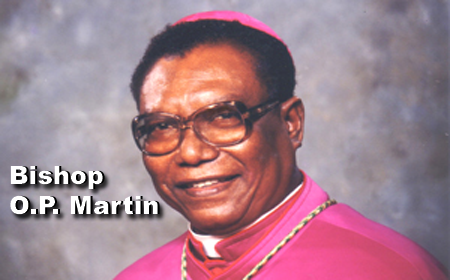 DANGRIGA TOWN, Stann Creek District, Thurs. Feb. 16, 2017–Since Sunday, the country has been mourning the passing of a man of God and a great educator, Bishop Emeritus Osmond Peter Martin; and in Belize City, a famous businessman, Arthur “Pou” Francisco, and an educator and former politician, Dr. Cecil “Chubby” Reneau (both featured elsewhere in the newspaper).

Bishop Martin peacefully passed away in the wee hours of today, Thursday, while sleeping in his family home in Dangriga.
His death, just as his life, cannot simply be glanced over.

He was a young Garinagu man from Dangriga who decided to walk so close to his God that he became the first native Belizean and Garinagu appointed as Bishop of Belize.

After completing his studies at the Kenrick-Glennon Seminary in St. Louis, Missouri, he was ordained a priest on April 3, 1959.

Twenty-three years later on October 7, 1982, he was ordained Auxiliary Bishop,

Two years later, in 1984, he succeeded Bishop Robert L Hodapp, S.J., and was appointed the Bishop of Belize City and Belmopan.

For his ordination, an estimated 4,000 Catholic faithfuls packed the St. John’s College gymnasium.

The theme at that time was, “You have not chosen me; I have chosen you.”

After serving as Bishop for almost two and a half decades, he retired in 2007 upon reaching the mandatory retirement age of 75.

That same year, on the night of September 18th, while in Belize City, he was bestowed with The Order of Belize.

Throughout his active time as Bishop, he served at a number of parishes in the diocese.

Even though he had begun struggling with the ailments of the aging process, Bishop Martin never lost faith in his God and continued to walk the road less travelled.

According to the Roman Catholic Chancery Office, funeral arrangements for the 86-year-old, beloved Bishop are pending awaiting further consultation with his immediate family and bishops in the region.