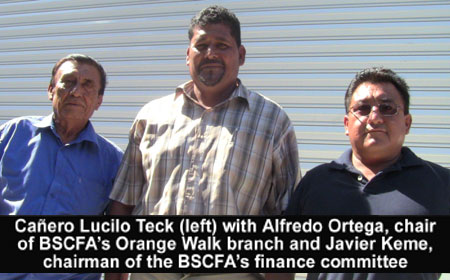 BELIZE CITY, Mon. July 13, 2015–The recent announcement by Agriculture Minister Gaspar Vega that sugar production had already hit a record high—with production reportedly up by 32%—even before the season drew to a close may have suggested that cañeros would be “smiling all the way to the bank;” but representatives of the Belize Sugar Cane Farmers Association (BSCFA), the main organization representing thousands of cañeros in the north, told our newspaper today that whereas it is true that sugar production has hit a record high this year, roughly 80% of cañeros still have hundreds of tons of un-harvested cane, valued at tens of thousands of dollars, in their fields.

Alfredo Ortega, BSCFA’s Orange Walk branch chairman, told us that the Sugar Cane Production Committee (SCPC) is expected to conduct a survey to determine the extent of the un-harvested cane.

Jose Novelo, SCPC chairman, confirmed that they will embark upon that verification exercise sometime next week. He said that they will look at the amount of cane burnt and not harvested, the new acreage planted, as well as the “ratoon,” a word used in the industry for regrowth of harvested cane.

The SCPC had projected that cane production this year would reach 1.45 million tons, and Novelo said that when deliveries were halted on Sunday, cane received by the factory at Belize Sugar Industries totaled about 1.186 million tons.

Novelo said that this may be the most un-harvested cane they have had since the turbine at the factory broke about 3 to 4 years ago.

Ortega, a cañero himself, said that he has been able to deliver most of his cane, but an estimated 500 tons remain in his field. At $35 a ton, this has an estimated value of $17,500.

Javier Keme, chairman of the BSCFA’s finance committee and a cañero of Corozal, told us that he was unable to deliver 1,000 tons of cane out of his 1,300. This is valued at $35,000. Meanwhile, Lucilo Teck, a cañero of San Victor, Corozal, who accompanied Keme and Ortega today, said that he was unable to deliver 200 tons (valued at about $7,000) from what was a surplus amount produced this year.
The BSCFA officials told us that preliminary estimates put the volume of undelivered sugar cane at 200,000 tons, valued at roughly $7 million – twice the amount of cane undelivered for last year.

We queried whether this was the usual reality for sugarcane to remain un-harvested at the end of the crop, and Ortega told us that it has been the case for the last three years, but this year, 2015, is the worst it has been for them.

The crop year was initially due to close last Wednesday, July 8, 2015, but after an appeal from cañeros and an intervention from Minister Vega, the Belize Sugar Industries conceded to allow the factory to remain open for 5 more days. Cañeros were lobbying for an extension to month-end; however, BSI has insisted that it has to remain on schedule to conduct factory maintenance in preparation for the next crop year, due to open in November.

As we reported last week, the 2014-2015 crop year opened more than a month behind schedule, because the cañeros and the factory were unable to reach an accord on their commercial agreement, which the company maintained had to be finalized before things could proceed.

The BSCFA officials say that apart from expanding the factory’s capacity to process more cane, which will not happen in time for next season, the only solution would be expanding the length of the crop year to allow more delivery of sugar cane and fewer losses to farmers.

Ortega went further to say that BSI should cease planting cane, so that cañeros, who expanded production on a promise from the factory that it would increase its processing capacity, could provide the quotas needed for production.

According to Novelo, the upcoming assessment will help them to plan for the next crop year, and to determine how much more sugarcane farmers need to replant and what management is needed in the field. The information, he said, may also affect the allocation of quotas, since, he said, there are some who are deemed cañeros who don’t really plant cane but who merely operate as brokers, and yet they get quotas to deliver. The verification exercise should help them “clean the system,” of such brokers, he indicated.

Novelo told us that a strategic development plan for the sugar industry is being developed through a collaborative effort by the Government of Belize, the cañeros and BSI. This plan, he said, should address some of the major issues, such as transportation, production, the coordination of delivery and sugarcane harvesting.

(The BSCFA officials closed their interview with us by extending condolences to the family of the late Kareem Clarke, as well as the Kremandala family, where he was employed up until the time of his murder.

Ortega lamented the loss of a person he described as “a very easygoing guy,” who, he said, always supported the movement and was always there encouraging them to move forward.
“We lost a good asset to the gun violence that is ongoing in this City,” Ortega said.)