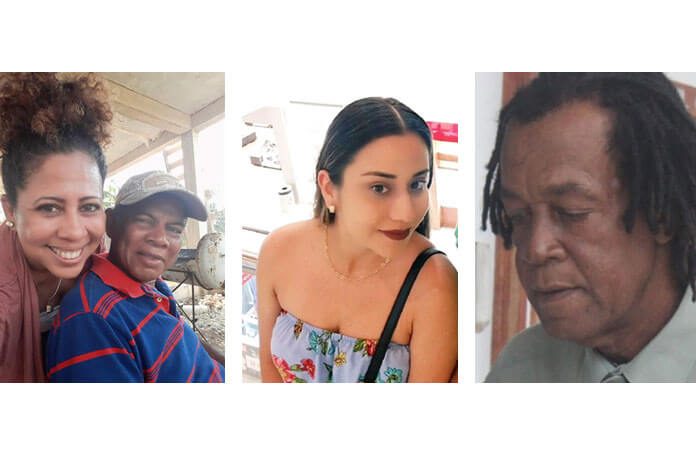 HATTIEVILLE, Belize District, Thurs. Nov. 28, 2019– Traffic on the George Price Highway came to an unexpected halt, just before the start of the rush hour on Wednesday evening, and traffic was backed up for miles as authorities worked to reopen the highway following a terrible road traffic accident which claimed the lives of six persons — four Belizeans and two tourists.

A seventh person reportedly succumbed to injuries suffered from the accident, today, Thursday. The accident victim died while undergoing treatment. Police, however, have not released the particulars of the person who succumbed today.

The accident happened near Mile 18, in the vicinity of Hattieville, when two vehicles traveling in opposite directions — a red Chevy Trax (a midsized SUV) and a white Dodge Ram van —collided head-on, and the collision left in its wake two piles of mangled wrecks. Injured persons and lifeless bodies hung out of the vehicles, and some persons were flung onto the highway, where they lay dead, or groaning in pain.

The impact from the collision flipped the van onto its top, and crushed the SUV, from the front to the back seat. 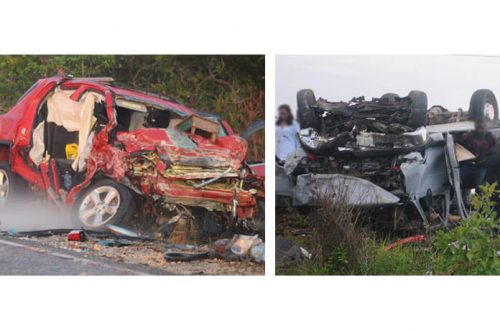 Traffic was backed up on both sides of the highway for miles, leaving only a small center corridor through which emergency vehicles and ambulances began navigating to and fro with the injured and the dead.

At least half a dozen ambulances screamed their way toward Belize City, depositing the injured at the Karl Heusner Memorial Hospital Emergency Room. The ambulances were eventually followed by police pickups in which the dead were stretched out and covered with what appeared to be white sheets.

In their report, police said that Hattieville police received a report at about 3:10 p.m. of a road traffic accident between Miles 18 and 19 on the George Price Highway.

When they arrived, police observed a red Chevy Trax SUV on the left shoulder of the highway in the direction of Belmopan. Its front portion was extensively damaged, said the report.

Police also observed a grey Dodge Ram 3500 van overturned on the left side of the highway in the direction of Belmopan. Its front portion was extensively damaged. 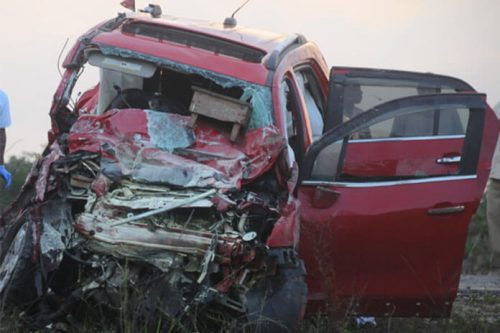 It was later learned that the driver of the van was Belizean Errol Anthony Belisle, 67, a tour guide and resident of #88 Amara Avenue, Belize City. Belisle passed away at the scene of the accident about 20 minutes after the collision, police said.

Police said there were 13 visitors to the country who were traveling in Belisle’s van. Two of those persons — Jacqueline Abad, 53, an American, and Sara Armijo, 51, also an American — died on the scene. 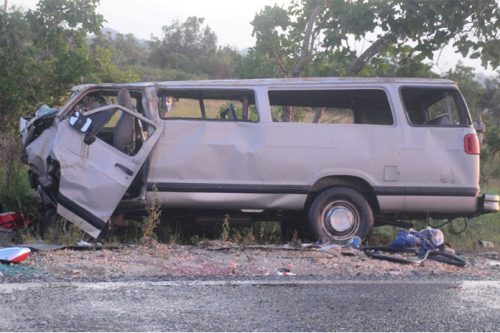 The driver of the Chevy Trax LTZ SUV was Lourdes Wade Hall, 45, a Belizean of #14 Sarstoon Street, Belmopan, police said. 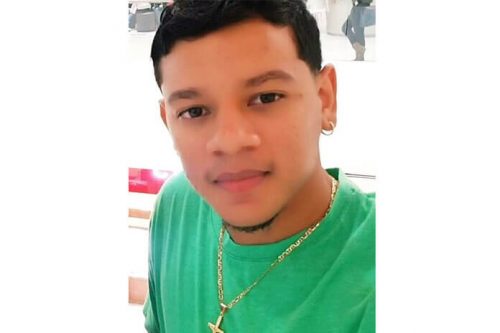 Amandala and 7News spoke with Clifton Hall, who lost his daughter-in-law, Lourdes Wade Hall, in the accident.

Hall told us that he had heard that there was a serious accident on the highway, but he learned that his daughter-in-law was involved in it when he received a call from his son, who is presently in the United States.

“I don’t know how he heard so quickly,” Hall told us. “We came down here to see what it was all about. They took away the 3 bodies,” he explained. Hall, his voice choking with emotion, told us that he was deeply shaken by what took place, and that he found it hard to talk.

Fighting back his emotions, Hall told us that the trio were returning from a passing out ceremony for new recruit Justin Wade at the Belize Coast Guard Headquarters, located at the old Belizean Beach at about Mile 4 ½ on the George Price Highway.

Hall told us that his daughter-in-law, Lourdes Wade-Hall, had two sons who are in the United States with their dad.

Errol Belisle, the driver of the van who died in the accident, had a court date yesterday, Wednesday. In March 2015, he was driving his Dodge van from Belize City toward Sandhill when he knocked down an 11-year-old Stella Maris student, Austin Olivera, Jr., who died as a result of being hit. At the time of the accident, Belisle told police that the child ran in front of the van.

At the time of that previous incident, Belisle was transporting tourists in his van, just as he was on Wednesday.

Belisle, however, decided to opt for a full trial, and was expected to go on trial on December 10, 2019. When Belisle left the Supreme Court yesterday, he went back to work, taking tourists on tour in his van.