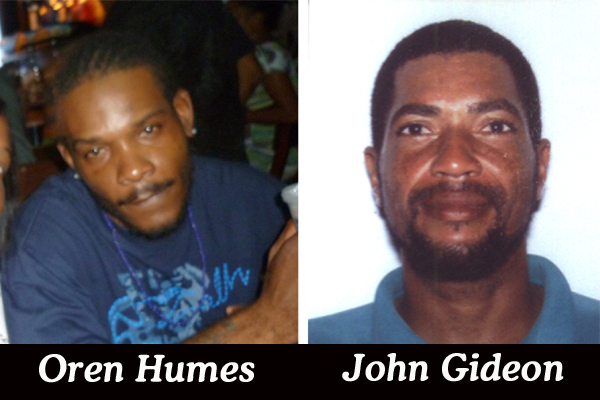 The trend of bloody weekend violence continues – three men were shot to death and another was chopped to death between Friday and Sunday. Dead are Ernest Savery, 37, of Perez Road, Ladyville; Orin Humes, 32, of La Milpa, Ladyville; John Gideon, 32, of Biscayne; and Jose Nimencio Guido Campo of Sunset Park Village, Belize District.

The deadly weekend began on Friday, February 22. Police said that about 10:00 that night, a gunman, dressed in black, rode up on a bicycle and fired at Ernest Savery, hitting him multiple times in the stomach. Savery fell to the ground and the shooter escaped into the night.

Savery was taken to the Karl Heusner Memorial Hospital (KHMH), where he was declared dead on arrival. Reports are that he had just exited his yard, and was going to the home of his mother-in-law on Perez Road in Ladyville when the gunman attacked him.

However, Savery, who was a prison officer at the Belize Central Prison in Hattieville, has been targeted a few times for death by gunmen.

On October 18, 2010, while travelling with two other prison officers in his car from the Belize Central Prison to Hattieville, on the Hattieville-Boom Road, a gunman, who was waiting in ambush, opened fire on his vehicle.

In November 2010, his brother, Eric Savery, was shot not far from their family house, but it was generally believed that Ernest was the target of that attack. Reports are that Eric Savery was driving his Mazda Car at the corner of Mex Avenue and George Street when another vehicle came up from the opposite direction and a man got out of the car and opened fire on Savery. He was rushed in a police mobile to the KHMH, but died while receiving treatment.

A decade ago, Ernest Savery, along with two others, had been charged with murder for the brutal death of San Pedrano fisherman, Justo Jairo “Galento” Perez, 62, who was killed in San Pedro in his home. Police reports are that about 5:00 a.m. on November 2, 2002, they found the body of Perez at his residence on the corner of Pescador Drive and Ambergris Street, San Pedro Town.

He was found with seven large wounds to the center, right and left side of the head, and two wounds to the forehead. Both hands and feet were tied together. Police immediately conducted an investigation, which led to the arrest of Ernest Savery, who was a 27-year-old laborer of Belize City at the time, along with Francis Eiley, 27, of San Pedro Town; Lenton Polonio, 24, a wood carver of San Pedro Town; and Frank Vasquez, 18, a laborer of Neal Pen Road, Belize City. All were charged with murder.

They were convicted of the crime at the Supreme Court, and were given a life sentence, but on November 4, 2009, five years after the men were convicted for murder and sentenced to life imprisonment, the Privy Council quashed the sentences of Francis Eiley, Ernest Savery, and Lenton Polonio.

The Privy Council reported that they had been convicted solely on the uncorroborated evidence of one man (Frank Vasquez) who was apprehended at the scene of the murder, bloodstained, and who was initially charged with the murder.

In return for giving evidence at the trial, Vasquez was promised immunity from prosecution by the Director of Public Prosecutions. The Privy Council considered the convictions of the three appellants to be based on shaky ground, due to the questionable nature of the evidence and the fact that Vasquez had been caught “literally red-handed at the scene,” and was therefore “a prime suspect”.

In their judgment, the Council held that the decision by the prosecution to offer Vasquez immunity was “surprising” and “his evidence had features that were unsatisfactory and suggested that his primary concern was to distance himself from involvement in the murder.”

The Privy Council therefore found the convictions to be untenable and overturned the sentence, and released Savery and the other two men.

The second person to be killed over the weekend was Jose Nimencio Guido Campo, 56. About 12:01 a.m. on Saturday, February 23, shortly after Savery was killed, Jose Campo was found “chopped up” by his son.

Police reports are that Luis Dedras Campo, 31, and his father, Jose Nemencio Campo, were travelling to their home in Sunset Park on the George Price Highway when their vehicle experienced mechanical problems. His father, Jose, left Luis and took a shortcut to go home.

When he did not arrive, his sons went back to the area to look for him, and not far from the footpath off the highway they found him dead, with chop wounds to his jaw area and his right palm; his left arm was amputated.

They immediately called police who came to the scene, and Campo was taken to the KHMH, where he was pronounced dead on arrival.

The motive of the attack is yet unknown and police have launched an investigation. No one has yet been arrested.

Shortly after Jose Campo was attacked, about 12:05 a.m. on Saturday, February 23, the third person to be killed, John Gideon, was walking home near Mile 17 on the George Price Highway, carrying his vehicle battery after his car came to a stop, when a gunman on a bicycle rode up and opened fire at him, hitting him multiple times in his upper body. The gunman then escaped into the night.

Police, who responded quickly to the shooting, saw Gideon lying on the side of the highway with gunshot wounds in his head, back, and face. He was taken to the Karl Heusner Memorial Hospital, where he was declared dead on arrival.

His wife, Dorret Gideon, told Amandala that she and her husband were at home in the American New Site area near Mile 17, off the George Price Highway, drinking that Friday night, when about 11:00 p.m., two men who were their friends came to the house to socialize with them.

About 11:45, her husband, John, drove the friends to their home in his car, to the other side of the site, but coming back, he ran out of fuel. He then called his wife and told her that he had parked the car at the side of the road, and had taken out his car battery, and was walking home.

According to police, while Gideon was walking home, the gunman attacked him.

Dorret said that she was at home waiting for him, when around 3:00 that Saturday morning, she became alarmed when he did not come home, and she went out to look for him. She could not locate him, however, and returned home.

At about 8:00 a.m., she got a call from his boss informing her that Gideon was at the morgue. She said that she was shocked because he was not involved in gangs or violence, and had no known enemies.

She said that during the day he had seemed calm and unworried, and had not reported that his life was in danger. She does not know why he was killed. She said that he was a dedicated father and a good provider for the family. They have been married for 12 years.

Gideon’s sister-in-law, Keisha Arzu, said that she has known Gideon for many years, and he was kind and generous.

John Gideon is survived by his wife, Dorret; his two children, ages 6 and 1; his mother; a host of relatives and friends; and his “family” of colleagues at the San Pedro Water Taxi.

The victim of the final murder of the weekend was a resident of La Milpa, Ladyville, and father of four children who was ambushed and killed while driving on the Hattieville Boom Road at about 8:30 p.m. on Saturday, February 23.

Oren Humes, 32, was travelling in his vehicle on a side road towards the main Hattieville Boom Road after dropping off a friend in the Boom area, and was returning home to La Milpa, when five gunmen who were lay-waiting him opened fire on his vehicle, hitting him multiple times.

Bullets went through the back glass of his Cherokee Jeep, through the sides and the front windshield. Humes had crashed into a tree while trying to escape from the murderous gunshots. Those who saw him said that he was riddled with bullets. Humes was declared dead about 11:30 p.m. when he eventually was taken to the Karl Heusner Memorial Hospital.

His family said that they were at home when they received a call that Oren had been shot and they went to the area and saw his bullet-riddled body in the vehicle. His friend who had responded to the tragedy had put him on the back seat to bring him to the hospital because he was still alive, but the vehicle had refused to start because, they believe, it had been damaged by bullets. The family said that he was left in the vehicle for about three hours, and during that time he bled to death.

They believe that Humes’ murder is retaliation for the death of Savery, which occurred on Friday night, because the killers believed that he, Humes, had something to do with the death. He had been receiving threats since Friday night and was even followed, they say.

Police have since launched an investigation into this murder, but so far no one has been arrested.

Oren Humes is survived by his mother, Martha Humes, 4 sisters and 3 brothers. He is also survived by his 4 children, who are Devin, Jamal, Oren, and Sherin; his common-law wife, Sherria Estell, and a host of relatives and friends.