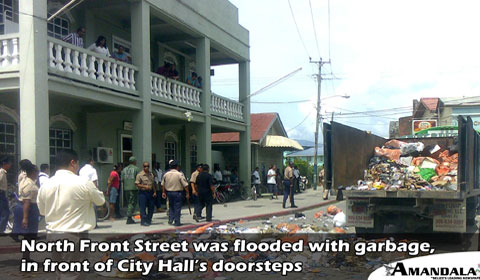 Up to press time this evening, a total of 44 Belize Maintenance Limited (BML) employees are in police detention at the Queen Street Police Station in Belize City after they were arrested and charged for causing an uproar in front of City Hall this morning by engaging in an impromptu protest during which loads of refuse were strewn in front of the building in a show of utter discontent with the Belize City Council’s management of its staggering sanitation debt with their employer, BML.

The source of their indignation stemmed from an early morning meeting that was held at the company’s Baymen Avenue office in which some 50 workers were informed that they would be placed on temporary termination since the company is struggling to meet its operating obligations, primarily due to non-payment of approximately 18 weeks of sanitation fees on the part of the City Council.

After receiving the grim news, the disgruntled employees decided to band together and headed over to City Hall to make a solemn statement in regards to the future of their livelihoods, which at this time, remains unclear since the Council has not indicated when it will be able to defray its financial obligations to the sanitation company.

As a result, the employees took matters into their own hands and in a show of frustration, some of the workers dumped bagfuls of garbage on the street in front of City Hall, while the others chanted “We want wi money!”, insisting that the Council make the necessary payments to their employer so that all its workers could keep their jobs.

Amandala spoke to a number of the displeased workers, many of whom had packets of noodles and “pack bread” in hand to signify what their families have to eat on a daily basis, and they angrily placed the blame squarely at the feet of Mayor Darrell Bradley, as they reiterated that Bradley’s reluctance to settle the Council’s debt to BML has unfairly put them in their present predicament.

Most of the workers are concerned about how they will feed their children and pay their school expenses. Since the majority of them are single parents who are the sole breadwinners of their family, their jobs are vital.

With their jobs in jeopardy, the group demanded that their employer be paid in full and lashed out at the Mayor for not doing so.

“I am already working and not collecting my pay for so long, and he [Mayor Bradley] still doesn’t want us to get paid. I got three children going to primary school, and one going to high school, and I need to take care of them. Why would he do something like this to us?” questioned Doreen McKoy, as she vented her dissatisfaction amidst the protesting voices of her spirited coworkers.

Well-known activist, Deon “Ras Pitta” Pitter, who himself was a former sanitation worker, also joined the distressed voices, pledging his full support for the workers and calling for the Mayor to “have a heart” and sit down with BML’s management to work out a solution to the problem.

Mitchell Danderson, BML’s Operations Manager, also stood with the crowd, and when we spoke to him, he told us what sparked the spontaneous protest.

He said, “As you are aware, we are owed 18 weeks of sanitation arrears by the Belize City Council. It has come to a point where we are unable to put some of the [garbage] trucks on the street. This is the last thing we wanted to do, to send people home. It’s a temporary thing but we have to do it because we cannot have people work and they don’t collect their pay, so we sent them home, and when we are paid by the City Council, then we could reimburse them whatever time they were off from work.”

Danderson flatly denied the assertion that Mayor Bradley has communicated with BML in the recent past.

“As far as we are concerned, he hasn’t made any contact with Mr. Ellis, the manager of the company, so he hasn’t been in communication with the management [of BML] any at all. It is very unfair for the Mayor to come to the media and say that he has given BML and its employees one year to make preparations to find other jobs for their employees, but that is ridiculous because we hire people from different walks of life. We hope that he [the Mayor] would show some dignity and come and say, ‘Mr. BML, let us sit and talk’, but that hasn’t happened in over a year even though Mr. Ellis made requests to meet with him”, he mentioned.

Soon enough, Sr. Supt. Edward Broaster and at least two dozen police officers descended on the gathering and ordered that they either disperse or face the consequences of the law.

After initially refusing, the crowd got back in their company bus and moved off, but not without tossing more bags of garbage onto the street as they went along.

As a result, they were met by a blockade of police vehicles as they reached in front of the Queen Street Police Station, after which they were directed into the station to face charges for their actions, which included littering and illegal gathering.

We later spoke to Mayor Darrell Bradley, who agreed that the plight of the company and its workers are the Council’s fault, but rebutted by saying that the situation was “unfortunate”, and is the result of an “extremely bloated contract” which he inherited.

“The reality and the truth of it is that that contract, together with Belize Waste Control’s contract, simply costs us too much money. I cannot maintain the payments in a period when we are in our slow season. This is something that we deal with every single year. The problem is not our ability to pay them; the problem is the contract and the cost”, he explained. 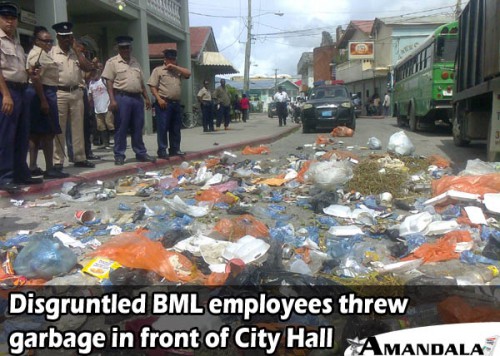 Bradley said that although he can understand the employees’ frustration, he maintained that they don’t have the right to throw garbage in front of his office.

Bradley insisted that BML will be paid, and that he has fulfilled his responsibility to give the company a year’s notice in relation to the termination of their contract, which BML officials dispute.

While he still cannot give an indication of exactly when the company will be paid its outstanding fees, he stated that all debts with BML will be settled by year’s end.

A few of the workers have accused Bradley of prioritizing streets instead of their welfare, but he countered by saying that the Council is working towards fulfilling its obligations through street works, and blamed the situation on the structure of the sanitation contracts, which, he implied, puts a constant strain on the Council’s finances.

Bradley also insisted that he has communicated with BML officials although he “could not remember” when was the last time he met with them.

He also reiterated that the concerns of the BML workers are the company’s responsibility. In expressing his sentiments regarding the plight of the BML employees, Bradley said his response to them would be, “… We are mindful of your situation; we are mindful of any decision and its impact on individuals. The most humane thing that we could do about this contract is what we have done, which is to notify the company in advance, so I will challenge anybody who says that as a Council, we are being unfair; we have given you one year’s notice; it’s not a month or a day before that we are telling you this. The reason why we are having this tension now is because we have put on the table that we are not going to renew BML’s contract.”

He asserted that BML needs to take care of its workers’ affairs, in the same way that he has to take care of the City’s business, and analyze what they will do between now and January 2015.

As the quandary between BML and the Belize City Council brews, the uncertain future of the hardworking sanitation workers, who are caught in the crosshairs, is blurred to an even greater extent since not only their jobs, but also their survival, hinge on outstanding payments which are not likely to be forthcoming anytime soon.