BNTU plans to “keep the pressure on” ahead of budget reading 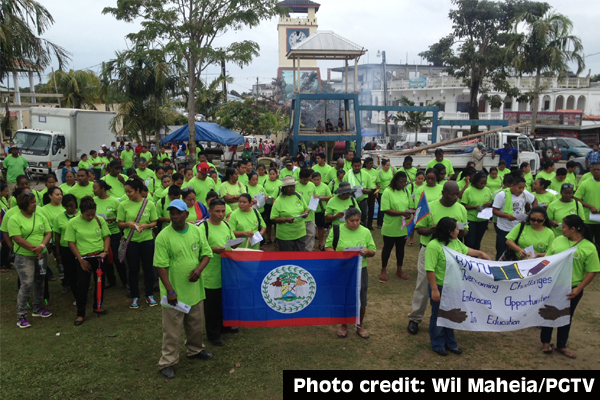 The Belize National Teachers’ Union (BNTU) plans to hold a press conference tomorrow morning, at which it will update the media and the general public on its plans to step up the momentum of its national activism leading up to the reading of the next national budget in just a few months.

Representatives of the BNTU and the Public Service Union met last Thursday with Prime Minister and Minister of Finance Dean Barrow to advance talks about the promised salary adjustment for teachers and public officers.

“We are looking at continuing to advance this cause. It is not a one-off thing. We will try to sustain this until [the] reading of the budget,” Flowers told us.

Last Friday, the BNTU hosted its last in a series of national rallies in Punta Gorda Town, and Amandala was informed by our associates at PGTV that roughly 200 teachers attended the highly spirited event. Teachers and their supporters marched around town and the rally was convened at P.G. Central Park.

Interestingly, it was the rural teachers who had a strong showing at the Punta Gorda rally, held from 9:00 a.m. to noon.

Speeches were delivered by BNTU’s national president Luke Palacio, as well as Hilton Garbutt, president of the PG branch, and Stephen Sho, head of the BNTU’s Toledo rural group.

The salary adjustment, the proposed Occupational Safety and Health Bill and Social Security issues were highlighted at the rally.

Looking back at the past month of rallies, Flowers told Amandala that they are satisfied that they were able to put out their concerns to the public – not just concerns over the dire need for a cost of living adjustment but also concerns about national issues which confront not only them, but also the children with whom they interact on a daily basis.

“For one, people understand why teachers are saying they need to have the salary issue addressed, and we have been able to steamroll public support,” she said.

Flowers told us that the details of the salary adjustment are still under negotiation, and they are still waiting for the joint negotiating team of teachers and public officers to come together and look at the response coming out of the meeting with the Prime Minister.

The BNTU reps also met last week with officials of the Ministry of Education, but Flowers told us that that meeting was their regular quarterly meeting, at which they discuss stakeholder concerns, such as teacher training. Flowers described that meeting as cordial.