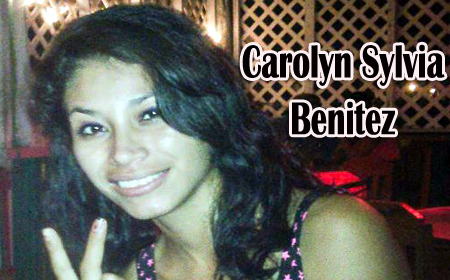 SAN PEDRO TOWN–Carolyn Sylvia Benitez, 28, of San Pedrito, San Pedro Town, a mother of three children who was working as a waitress at a restaurant in San Pedro, had been reported missing since Monday, January 12.

Benitez, however, was found dead, her body in a state of decomposition, at about 11:30 Saturday morning on the road that runs through Grand Belizean Estates, in an uninhabited area about 3½ miles north of San Pedro Town.

An autopsy conducted on her body was not able to conclusively determine the cause of her death, due to the advanced state of decomposition of the body.

Benitez was last seen alive by her family on Sunday, January 11, before she left home to go to work. According to police, at about 9:30 Thursday night, January 15, Danilo Alvarenga, 36, visited the San Pedro Police Station and reported that on Wednesday, he received a call informing him that his common-law wife, Carolyn Sylvia Benitez, had been seen drunk at about 4:00 Monday morning, January 12, and that she was sitting on a bench with an alcoholic beverage in her hand in the company of four men, and that was the last time she was seen.

Several attempts were made to locate her, but the efforts were fruitless.

A search party, comprised of friends and relatives, was then organized to look for her. On Saturday, the searchers received a report that the odor of rotting flesh was overwhelming at a particular location and that vultures were seen circling in the area.

The searchers braved the stench of rotting flesh and went to see what was in the area and that was when Benitez’s decaying body was found, on the north side of the road, lying face-down in mud and water, partially clothed.

Although animals had been mauling the body, police suspected foul play in the death.

Police said that due to the decomposition of the corpse, an onsite autopsy was conducted by the police coroner and his team from the Forensic Unit. The doctor declared Benitez dead at 5:47 Saturday evening. An inspection of the body revealed bruises on the face, neck and back, and the body had multiple blunt force injuries on the right side of the face, and on the neck.

The autopsy did not conclusively determine the cause of death, and Benitez was buried in the area after the post-mortem exam.

Police suspect that Benitez was murdered elsewhere and her body disposed of in the uninhabited area.