Simon Bolivar was a man of contradiction. He was willing to set in motion the gradual abolition of slavery, but that would be as far as he would go. 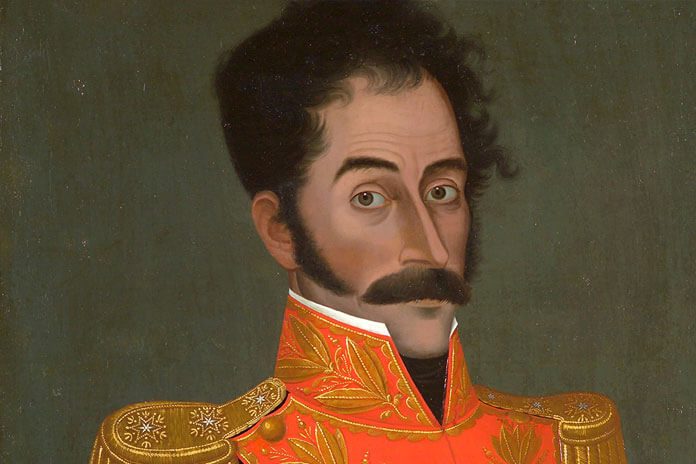 December 24, 2019– Colombia and Haiti have both been ignited by protests, as part of what looks like a global uprising against austerity, corruption, and unaccountable politicians. In the case of Colombia, African descendent and indigenous communities have been particularly vocal, inserting their unique demands into broader narratives for systemic change. The link that binds these resistance movements dates back to the turn of the nineteenth century, when Latin American liberator Simon Bolivar sought help from the newly founded republic of Haiti, the first country in Latin America to gain independence, and the first republic to be born out of a slave revolt. It was out of this often unacknowledged rendezvous that the struggle for Latin American independence began to take off.

Haiti was once the French colony of Saint-Domingue, the “Pearl of the Antilles” for slavery. In late August 1791, its enslaved population rose up in what the historian Ada Ferrer calls a coordinated revolution, where “the world’s most profitable and powerful system of slavery had been destroyed by its own slaves.”

The slaves, together with the privileged mixed race, and even some of their white accomplices played the various powers—Spain, Britain, and France—against each other, while donning the memorabilia of the Jacobins. They invoked the language of French republicanism. In 1793, colonial authorities were forced to decree abolition. In 1794, the National Convention in Paris ended slavery in all of its colonies. A decade later, in 1804, Haiti became an independent nation.

The historian Robin Blackburn has argued that it was the revolutionaries of Haiti, and not the French government, who brought abolition onto the agenda during the French revolution. The late Trinidadian activist and scholar C.L.R. James has gone even further, arguing that the French revolutionaries were forced to crumple up the “Declaration of the Rights of Man and of Citizens” and shove it in their pockets in shame when confronted with the challenge from Saint-Domingue.

Post-revolutionary Haiti was not without its complications. Soon after independence it would be split into two: Henri Christophe’s kingdom in the North, and Alexandre Petion’s republic in the South. The north was categorized by large-scale landholdings, managed by military officers, and compelled labor from former slaves to run its economy. The south went through an agrarian reform, which, however ambitious, still couldn’t prevent high-ranking officers from receiving large plots of land. Both were committed in various forms to a new foreign policy: the advancement of liberation struggles beyond their own borders, the transformation of Haiti into a safe haven for revolutionaries in exile.

From King Christophe’s letter exchanges with William Wilberforce and Thomas Clarkson—two key abolitionists in England—we know that he was interested in developing his kingdom with emancipation as a guiding spirit. We also know that, with his close association with Prince Saunder—a teacher from the U.S.—Christophe was interested in relocating black U.S. freedman to Haiti.

But it was Petion’s republic, in the south, that became free soil for political dissidents and fugitive slaves alike. James McKowen, a slave owner, learned this the hard way. Seven of his slaves took over Deep Nine, his ship, and set sail for Haiti. When he arrived days later, he was confronted by President Petion, who invoked article 44 of the 1816 constitution, declaring Haiti to be free soil, and providing citizenship to all non-white foreigners who arrive on its shores. McKowen was forced to return with his ship empty, without the slaves who commandeered their way to Haitian citizenship.

The article in the constitution declaring all non-white foreigners to be citizens was radical. It angered Christophe, who thought it could endanger national security. But Haiti was not just free soil for slaves on the run; it was also a sanctuary for revolutionary republicans, like Simon Bolivar, the man who would become known for being the liberator of what was then Spanish America.

Bolivar was born into a rich Venezuelan family and received an elite education. He inherited four haciendas, two houses in Caracas, and numerous slaves. He gave it all up for the cause of revolution, hoping to free slaves throughout Spanish America. His military career had a slow start including campaigns in Venezuela, Ecuador and Peru; by early 1815, years after the anti-colonial struggle began, he was facing military hardship. A humiliating defeat by Spanish forces in Cartagena (in present day Colombia) forced a retreat, and on May 9, 1815, he set sail for Jamaica where he famously wrote his “Jamaica Letter,” requesting help from European powers, particularly Britain, in his liberation effort.

In the words of the historian Bradford Burns, “the Liberator found only cold politeness.” He did, however, tap into a network connected to a Robert Sutherland, a British merchant living in the newly liberated Haiti. In late 1815, Bolivar departed for Haiti undeterred, where he would meet other revolutionary exiles, all of whom were promised patronage by Alexandre Petion, a wealthy Dutch Merchant named Luis Brion, and Sutherland himself.

The general disposition of Bolivar’s class was to maintain their privileges and prevent rule by the mixed races, the blacks, and the indigenous.

Petion gave Bolivar a warm reception. He promised 6,000 rifles, munitions, supplies, a printing press, and hundreds of Haitian sailors and soldiers, on one condition: that Bolivar abolish slavery in the new republic he sought to found. Bolivar accepted the offer, and when things didn’t go according to plan, he was offered refuge again. Sure enough, Bolivar, who had freed his own slaves before patronage, did what he could to stay true to his word. By 1819, when he persuaded the congress of Angostura, in Colombia, to end the slave trade, Petion and Sutherland were already dead. In 1821, he convinced the Congress of Cúcuta, also in Colombia, to pass a “free womb” law, decreeing that all children born to slave mothers would be emancipated at the age of eighteen. In his liberation armies, one-third to one-half were black.

The Idea of Haiti

But Bolivar was a man of contradiction. He was willing to set in motion the gradual abolition of slavery, and sure enough, he needed indigenous and black people in his ranks. But that would be as far as he would go. Bolivar feared “pardocracia.” Like many other leading republican revolutionaries, Bolivar was from the creole elite—Spanish by blood, but born in the continent. The general disposition of his class was to maintain their privileges and prevent rule by the mixed races, the blacks, and the indigenous.

Haiti, he recalled, was once his benefactor. But its history also posed a threat. When one of his right-wing men, Padilla—mixed race himself—perhaps for personal reasons decided to rally the blacks and indigenous in a coup, Bolivar complained: “Legal equality is not enough… they want absolute equality… next they will want pardocracia… in order to then exterminate the privileged class.” He had him executed.

Bolivar left Haiti with a dream: Colombia, the union of New Granada and Venezuela. Indebted to what he called “the only free republic in the new world,” he also left with a fear, what he himself called “the idea of Haiti.” Haiti made Colombia possible, but its legacy also haunted it, and for centuries the racial code that Bolivar kept intact from Spanish colonialism left its mark not only on the institutions of the country, but the whole continent. Latin American independence was for the Creoles, and they’d be damned if it fell into the hands of former slaves and indigenous inhabitants.