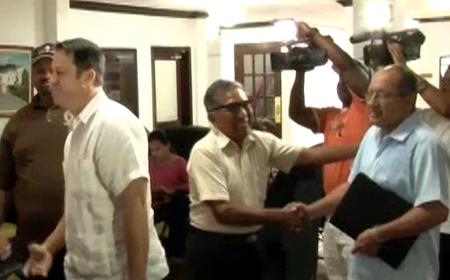 BELIZE CITY–Cañeros are scheduled to meet this Sunday, December 14, and, if all goes well, they will accept a 7-year commercial sugar agreement that was brokered today between principals of the Belize Sugar Cane Farmers Association (BSCFA), and Belize Sugar Industries (BSI)/American Sugar Refineries (ASR) in the presence of Prime Minister Dean Barrow, Deputy Prime Minister Gaspar Vega, and other government representatives at the Radisson Fort George Hotel in Belize City.

The concord, of sorts, among the sugar partners emerged after ASR’s representatives acknowledged the final proposals of the BSCFA, which, some have opined, has bent over backwards to hammer out an agreement in the best interest of not only the fractured sugar industry, but the 5,500 plus cane farmers who are uncertain about the prospects of the currently delayed 2014/2015 sugar cane crop season.

When he came out of the meeting flanked by his deputy about an hour later, PM Barrow told us that he negotiated to get BSI/ASR to accept the BSCFA’s final proposals which, according to Barrow, reflected a great deal of maturity and compromise on the association’s part.

While that is considered positive, if not great news for the industry, the BSCFA’s negotiating team arguably now have a proverbial bone lodged in their throats since they have to go back to the farmers for mass acceptance and support of an agreement that, the PM noted, is not of an interim nature, but will be a final, binding, contractual document for a period of seven years, in which the association has, to a huge extent, relinquished ownership of the cane, and has accepted a payment of 51 cents per ton of bagasse.

“A final agreement is to be signed — subject, as I said, to ratification of the acceptance which we were able to procure this morning; [however] ratification of that acceptance will have to be by the general membership of the BSCFA…. There’s an acceptance of the 51 cents with the provision of a review after 3 years and discussion about the possibility of an increase depending on whether or not BELCOGEN is profitable at that point. There is [also] an agreement on that if in fact there were to be any future by-products [of sugar], that would become the subject of negotiations between the BSCFA and BSI/ASR”, Barrow mentioned.

Anyone who is familiar with the industry would know that making such a proclamation to a crowd of militant cañeros, most of whom have previously stood in opposition to the multinational’s proposals, would not be an easy task.

BSCFA Committee of Management Chairman, Ezekiel Cansino, who will have to convince the farmers that the agreement is the best that could be reached under the circumstances, told us that there is a need to start the crop, and therefore, he will do his best to let the cañeros be aware of the details of the agreement so that they can decide whether they will accept it or not.

“We believe that there is a need to start the crop and the proposals that we gave to ASR, we think is the best that we can give them, and we will try to present it to the cane-farmers [to persuade them] that it is the best for everybody in the sugar industry”, he said.

As we have said, the proposed final agreement is for 7 years – a span of time which the BSCFA had adamantly resisted some weeks ago.

We understand however, that after 3 years, the BSCFA will have the right to withdraw from the agreement based on whether or not BSI/ASR produces a strategic development plan for the industry, including an investment plan to ensure an increase in production capacity, among other criteria.

That strategic development plan is expected to be concluded within a year, and rumors indicated that BSI/ASR had actually wanted more than what was proposed in the final agreement, but the company had to relent due to the pressure brought down on them as a result of stalled production due to the delayed sugar crop season.

The corporate giant had recently engaged in what was described as a “divide and conquer tactic” when it made attempts to sign individual agreements with cañeros, thereby bypassing the BSCFA, and today, Mac McLachlan, vice president of international relations for ASR, was not quite as optimistic or open about details of the discussion.

“I don’t want to elaborate too much on the discussions we have had. I only want to say a couple of things. One, I believe that we have had some very constructive discussions today. I believe that we are on the right course to resolving a number of issues. There have been compromises on all sides and I am hoping that once BSCFA takes back to their membership the kinds of ideas that we have discussed today, we’ll be in a good place, and we’ll be able to rapidly conclude an agreement which will lead to a rapid beginning of the crop, and that is fundamentally what we all want”, McLachlan told us.

According to Deputy Prime Minister Vega, who had been in several meetings with the BSCFA and the Sugar Industry Control Board (SICB), BSI/ASR has agreed to produce the financial records of BELCOGEN, the company that produces electricity from the bagasse, as requested by the BSCFA.

Prime Minister Barrow indicated that if the cañeros agree on the proposed final agreement, the signing of a new commercial agreement is expected to take place on Monday or Tuesday of next week.

Depending on whether or not the farmers accept the prickly agreement, the 2014/2015 sugar cane crop season may get underway next Friday, December 19.