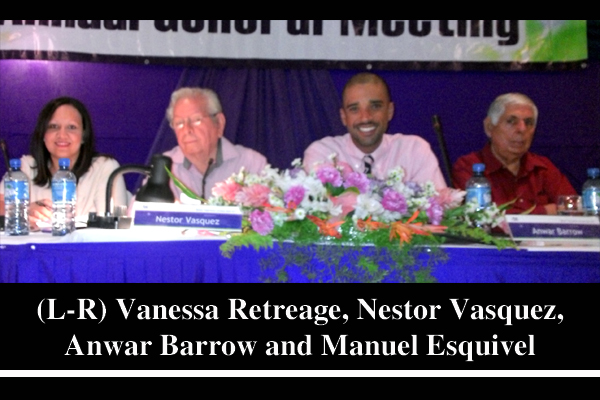 BTL executive chairman Net Vasquez said that although profits have fallen, the company is now paying a bigger share in dividends.

According to Vasquez, this is the highest dividend paid since they were appointed directors by the Government of Belize in 2009. Last year, he said, BTL had to use what the articles allowed them to use – a minimum of 45% of profits. This year, they are paying back shareholders nearly 59% of the profits.

Michael Young, SC, representing a shareholder, said a key question is: Would your money have been better at the bank or at BTL? Banks pay a rate of about 2.5%, he said, adding that shareholders at BTL are making a greater return from their investment in BTL than if their monies had been held at the bank. Young said he is not sure how it compares to returns on savings at the credit unions, but added that the value of shares is likely to appreciate to possibly yield better returns than credit unions.

In the chairman’s remarks tonight, Vasquez explained that the question of dividends is still under some restriction due to an order from the Caribbean Court of Justice (CCJ), in line with legal challenges mounted by former shareholders against the nationalization of the company back in 2009.

Telemedia notes that 2012-2013 marks the 4th year under “full Belizean” ownership. As of March 31, 2013, the Government of Belize holds approximately 63% of the total outstanding shares in BTL, the company reports.

According to the chairman, the Government of Belize has undertaken to obey that CCJ order of December 17, 2012, and so dividends declared tonight will only be payable to the small shareholders until further notice from the CCJ.

According to Vasquez, when the case is called up at the CCJ on October 12, the Government will be asking for the discharge of the injunction barring the payment of dividends not just to the Government of Belize, but also the SSB and the Central Bank – the other two major shareholders in BTL.

Meanwhile, directors report that net profit decreased by $5.5 million or 21% to $21 million from $26.5 million, while earnings per share decreased to 42 cents from 53 cents per share from the previous year. Additionally, shareholders’ equity increased by $9.1 million to $253.1 million after inflows from profits and declaration of dividends.

In explaining the drop in BTL’s profitability, Vasquez told shareholders that the decline was chiefly due to a drop in revenue of about $1.5 mil coupled with an increase in asset depreciation.

Also on the accounting front, BTL reported that during the 2012-2013 fiscal year, gross revenues contracted to $143.8 million from $145.4 million in the prior year. (The accounts were audited by Pannell Kerr Foster.)

According to Vasquez, BTL came very close to the budgeted profit of about $20 mil. He told shareholders that it was not that they didn’t manage the company properly, but they have been working to reduce rates to customers.

The chairman also spoke of plans to introduce IPTV – Internet Protocol Television – a move which he said Telemedia would make as soon as the timing is right.

During the fiscal year, BTL began preparing for the liberalization of Voice Over Internet Protocol (VoIP) and launched its new DigiCell 4G service while reducing the price of high speed Internet/fixed broadband services. Vasquez said at tonight’s AGM that the Internet service improvements resulted in a $3 million benefit to customers.

He announced that a new Executive Committee, which has two members: Vasquez and Barrow, has been formed and they expect the Committee to breathe more life, innovation and a fresh perspective into the growing company.

Vasquez reported that the company’s cash management, once again, resulted in a strong liquidity position, with cash on hand having increased by $21 mil to $51 mil, as compared to $30 mil for the same period last year.

BTL noted in its 2012-2013 Directors’ Report that the board’s main focus during the fiscal year—which ran from April 1, 2012, to March 31, 2013—was creating and defining “a growth strategy which would sustain the company’s development as it continued on its mission to drive down the price of services, offer new products and expand its customer base.”

“The company continued to see growth in mobile voice revenues, internet & data revenues and postpaid mobile data revenues. The growth in these revenue streams were less than the decreases stated below, which were impacted by reduced usage from our fixed line and international services,” BTL’s Directors’ Report explained.