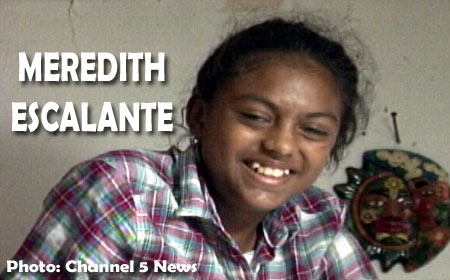 SAN PEDRO, Thurs. Feb. 12, 2015–The quiet of the San Pedrito area of San Pedro Town was shattered at about 9:30 last night when the sound of 4 to 5 gunshots rocked the neighborhood. There was fright and panic and police responded quickly.

Police conducted a search of the area, but did not find the shooters.

A 13-year-old girl, however, who was in her house at the time of the shooting, was grazed in the chest. She was rushed to the San Pedro Polyclinic, She is now admitted to ward and has been listed in a serious but stable condition.

Maria Escalante, 35, of San Pedrito, and her daughter were at home last night at the Spats Apartment when gunshots sounded. Escalante went to close the door, but bullets penetrated the wall and the door. She then saw that her daughter had been hit and was bleeding.

Not long after, Escalante saw two men run out of the yard and mount two bicycles, before escaping from the area.

The victim was then rushed to the San Pedro Polyclinic.

Police went to the scene of the shooting, but could not find the shooters. The motive for the shooting is not known as yet.

In another shooting incident in San Pedro, at about 11:30 p.m. on Monday night, February 9, gunmen went to the apartment building of Kareem Eagan for a second time in about two months and fired about 7 shots at his dwelling.

On the first occasion on which gunmen went to the apartment building, on the night of December 14,between 7 and 10 shots were fired, but Eagan had not been at home at the time. On Monday night, however, he was at home watching television, and was wounded by a bullet in his right foot near his ankle. He was taken to the San Pedro Polyclinic, where doctors treated and released him.

Police believe that the motive for Eagan’s shooting is drug-related.