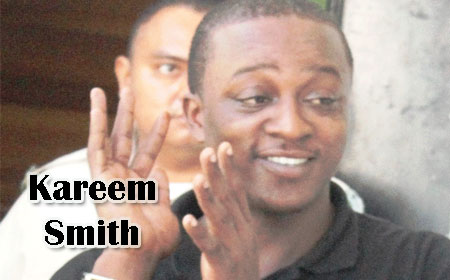 BELIZE CITY, Fri. Oct. 23, 2015–A man who was caught on a surveillance camera burglarizing a home in the St. Martin De Porres area was remanded to the Belize Central Prison after he was arraigned on the charge before Senior Magistrate Sharon Fraser today.

Kareem Smith, 27, pleaded not guilty to one count of burglary, but the court prosecutor objected to granting him bail on the strength of the prosecution’s case against him.

Magistrate Fraser upheld the prosecution’s objection and remanded Smith to prison until his next court appearance on November 23.

Smith, who was out on bail prior to this latest brush with the law, maintained his innocence, telling the court that he is not the kind of person to break into, people homes. He also alleged that the police charged him because he refused to snitch on a friend of his.

Smith and an accomplice were caught on a surveillance camera as they entered and later exited the house with the stolen items.

In May 2008, Smith, then 16, and his brother, Hakeem Smith, were charged with a number of offences in relation to a grenade blast that occurred at the corner of Vernon and Mayflower Streets, which left one person dead and eleven others injured.

They were eventually acquitted of the charges.