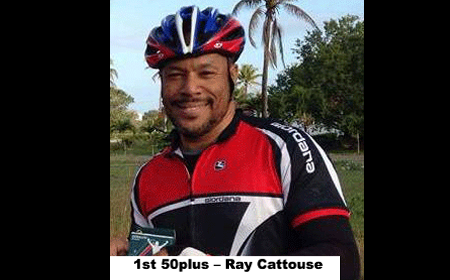 At 6:00 a.m., all 41 cyclists were ready to go at the start line, properly dressed in their thermal wear to manage the 62 degree “cold” weather on the Boom – Hattieville by-pass road.

At the sound of the whistle, George Abraham was the first to launch an attack; the race speed went up rapidly to 30+ mph for the first half mile of the race. George would try again and again, until finally he managed to get away with Brandon Cattouse. They were quickly tracked by the Smart Team who was out there in numbers, 5 men to be exact.

As soon as they were caught, George attempted to make a run again. As he got out of the saddle to attack, his chain broke and his right foot flew out the pedal. He tried to bring himself back upright, but ended up hitting the pavement to the left, sliding into the middle of the road, causing everyone in the peleton to start playing “Dodge the George.” Thankfully, everyone managed to get around the spill. Veteran cyclist Kenroy “Smokes” Gladden stopped and rendered assistance to his friend, helping him to get into the C-Ray vehicle, which transported him to the KHMH. 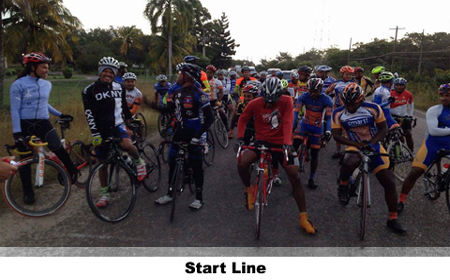 There were several attacks from the Smart and Benny’s teams leading up to the first station prize. After a few tries, a break was formed by Darnell Barrow, Phillip Leslie and Mark Staine. Approaching the prize at the prison, Darnell reminded the others that he was the fastest of the three, easily taking the Gift Certificate from Da Bizz BBQ. The three would continue to run; at the half-way point at the Hattieville round-about; they had a 40 second lead on the main peleton.

On the return, the chase started; the peleton was strung off on the road edge. The pace was high, and no one was allowed to get a decent shelter. Somewhere after passing the prison, the attacks started, and the peleton began to splinter. The lead three were caught! What was left of the main peleton remained intact, or at least until they got to the Dump, where the sprint points were. Junior cyclist Darien Anderson was adamant about getting sprint points, and he attacked just before the line, taking the 8 points awarded to the first person to cross the line. Byron Pope was hot on Darien’s wheel, collecting 6 points. A gap was opened by the two; Mark Staine, Phillip Leslie and Quinton Hamilton got the remaining 4, 3 and 2 points, respectively, as Anderson and Pope were being chased.

The Smart Team committed to the chase, and as soon as Anderson and Pope were caught somewhere before Fresh Pond, the flag was waving for another station prize, and this one was claimed by Mark Staine – $25.00, courtesy Cards Heating and Cooling Inc.

Another break was formed – Mark Staine (Smart), Phillip Leslie (Benny’s), Erwin Middleton (Digicell) and Quinton Hamilton (Unattached). Looking at the representation in the break, one would automatically think that the only team tasked to do the chasing would be C-Ray. The Smart Team had a different view; seemingly, they didn’t have enough confidence in Mark Staine to win amongst the others, so they decided to track them down in hopes of delivering their sprinter, Darnell Barrow, to the line.

The chase started as the Smart Team lined up in the front; Tariq Cano was the first to take a pull, taking the speed to 28mph. He did his job, bringing the lead 4 very close, and pulled off somewhere near Gentleville. Next up was Herman “Hijo” Requena, who automatically took the speed to30mph. On his wheel was their sprinter, Darnell. The lead-out started, and Hijo was taking the pace higher and higher. In front, Quinton Hamilton was doing the majority of the work to make the break last. Middleton looked back and realized that the peleton was about to swallow them, and he started the sprint. 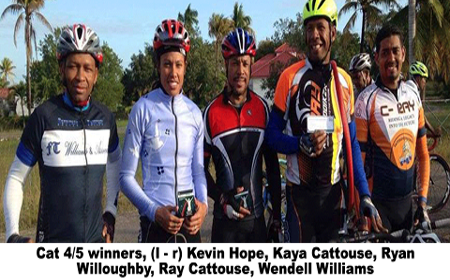 Notably, George Abraham suffered a broken collar bone, three cracked ribs, and some scrapes and bruises from his spill. He will be off the bike for at least 6 weeks. Speedy recovery, George! We say a special Thank You to Kenroy “Smokes” Gladden, who withdrew from the race to give assistance to George, causing him not to finish. For this, we are still awarding Smokes with his 3 points, which are given to all finishers. 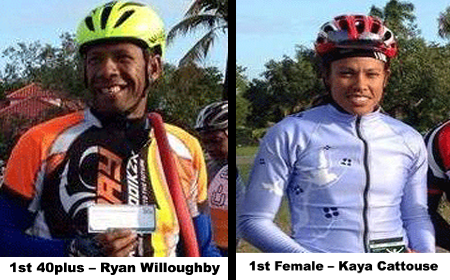